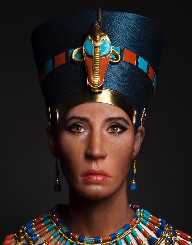 Nefertiti was the wife of Egyptian Pharaoh Akhenaten and one of the two women who dared to assume ruling powers. The other was Queen Hatshepsut.

Nefertiti was a mysterious figure in Egypt’s history. Her parentage and early childhood records are shrouded in mystery. No one knows with certainty where she came from. Historical scholars have two disputing theories of her origin.

The first theory narrates that Nefertiti was the daughter of a high ranking Egyptian official called Ay. If this is true then she was of Egyptian origin. The second school of thought says that she was the princess of the ancient kingdom of Mitanni. The kingdom existed in what is today the northern part of the Republic of Syria. Both accounts lack detailed documentary proof. So they remain just as such, theories.

She got married to Akhenaten before he became the king of Egypt. At the time of their marriage, Akhenaten was sixteen while Nefertiti was fifteen. Again records do not give a precise date of their marriage. The royal couple had six daughters with no son.

Akhenaten was crowned the king of Egypt in 1353 BC. He assumed the titled Amenhotep IV. He would later change his name to Akhenaten. His reign lasted until 1336 BC. Nefertiti became the king’s royal and powerful queen. Queen Nefertiti was instrumental in the transformation of Egypt on several fronts. She was depicted as a close companion of the king.

Breaking from tradition, she mounted the royal chariot and accompanied the king on many occasions. Some ancient portraits show her expressing her romance with the king in public places. She even had her own official crown. This was highly unusual in Egyptian society. Historians argue that her elevation to the king’s political aide put her in a position that influenced how Egypt was governed. Her influence in the socio-economic changes in the kingdom transformed Egypt into a wealthy and formidable empire.

Nefertiti was part of the spiritual transformation that swept Egypt during her husband’s reign. For a long time, Egypt was a polytheist society. Amun Ra was the supreme god, with other gods under him like Osiris, Anubis, and Homer. Akhenaten purged away all these gods and proclaimed a monotheistic spiritual system. Ate was new supreme and only god in Egypt. Akhenaten and Nefertiti became the chief priests of the worship temple. Old worshipping alters were demolished and new temples built to honor Aten. The royal couple changed their names in allegiance to their only god Aten. King Amenhotep IV became Pharaoh Akhenaten. Nefertiti assumed the name Neferneferuaten.

The powerful Queen Nefertiti reigned as the partner of Pharaoh Akhenaten until around 1341BC. She disappeared without a trace. Just as she came into the limelight, her disappearance was shrouded in mystery. She attended no activities with the King nor did she appear in public. Her portraits and carvings slowly faded into the dark. Finally, the influence and image of Queen Nefertiti disappeared altogether.

Theories of her death have been speculative. There was no royal announcement and burial of the royal Queen Nefertiti. Others said she fell out of favor with the king and decided to stay away from her previous official duties. That she left the new palace in the capital and relocated to the old capital palace. All these thoughts point to one thing; no one knows what befell the once powerful queen of Egypt.

There was a theory that Nefertiti assumed the throne in the guise of a male personality after the death of King Akhenaten. The possibility that Nefertiti was the same person as Pharaoh Smenkhkare was highly debated on. It was equated to the previous scenario of Queen Hatshepsut. Upon her husband’s death, Hatshepsut assumed power and decreed herself the Pharaoh. But with Hatshepsut, all Egypt knew that since the new king was much younger to rule, Hatshepsut was just a transitional ruler. The theory of Nefertiti being Smenkhkare was dismissed.

Nefertiti was known as the most beautiful woman in Egypt. She came second only to Cleopatra. In the few years of her reign with her husband, she brought monumental changes. Egypt became a military superpower. The traditional norms of the queen being a just the wife of the Pharaoh were broken. Egypt moved from worshipping many gods to the worship of a single deity. Her daughter was married to the most famous king of Egypt, Pharaoh Tutankhamen.

To date, the only memory of the existence of Queen Nefertiti is the bust discovered in Thebes. It is now on display in Germany.