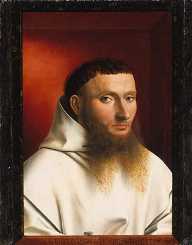 Jan van Eyck was born somewhere between 1380 and 1395. Due to no birth records existing for him, scholars work back from the dates of his later life. He was most likely born in Maaseik, which is in present-day Belgium. Van Eck had at least three siblings, one sister, and two brothers. Also, his brothers were both painters.

Van Eck knew the Latin, Greek and Hebrew alphabets, a rarity for painters of the time. It is apparent from his knowledge of the alphabets, that he studied the classics.

The court of John of Bavaria, in The Hague, made payments to "Master Jan the painter" between 1422 and 1424. These are the first records to be found for van Eyck. His rank was Valet de Chamber, and he had two assistants.

John died in 1425, and van Eyck then relocated to Bruges. As a result, Philip the Good employed him later that year. Record keepers maintained good historical records after this time.

Van Eyck became court artist as well as a diplomat for Philip. Van Eyck earned a salary from the court rather than take commission work to earn a living. As a result of being on a salary, it allowed van Eyck greater artistic freedom.

Over the next ten years, he established his reputation.

His contemporaries saw him as a revolutionary, and many tried to copy his methods.

From 1426 to 1429, van Eyck took several trips on behalf of Philip the Duke of Burgundy. The reason for most of the journeys is still unknown today. One of them was to paint Philip's new bride-to-be so he could see her before the marriage.

Van Eyck had private clients as well as his work in the court. One of his best-known works was the Ghent Altarpiece. Van Eyck painted the piece for JodocusVijdts, a politician, financier, and merchant.

Van Eyck died on 9th July 1441. He had many unfinished works at the time of his death. His brother Lambert took over the workshop.

There are approximately 20 paintings that have been attributed to van Eyck that have survived.

With his religious paintings, the Virgin Mary always featured as the central figure. The only exception was the Ghent Altarpiece.

People held Van Eyck's work as a portrait artist in very high regard. Right across Europe, people admired his painting. The attention to detail and lifelike paintings of his subjects were second to none. The Portrait of a Man with a Blue Chaperon from c. 1430, is the earliest surviving painting.

He also used symbolism and illusionism in his paintings, for which he became renowned. Van Eyck saw the spiritual and the material worlds co-existing. The iconographic symbols in his paintings represented his view. The Arnolfini Portrait from 1432 was one such painting full of symbolism.

Van Eyck signed his paintings, and he was the only Netherlands painter to do so in the 15th century. Also, fortunately, his signature ensured his reputation stayed intact, with people recognizing his art.

Not only did van Eyck sign his paintings, but he also signed and dated his frames. Sadly, few if any of the frames have survived.

After his death in 1441, members of van Eyck's workshop finished paintings that remained incomplete.

Van Eyck married Margaret in approximately 1432. The couple had two children, but stories about the life of Margaret are elusive apart from that.