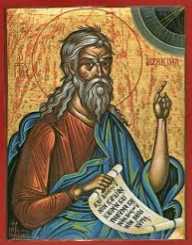 Ezekiel was born c. 622 BC. He was born in Jerusalem, Israel, and his father's name was Buzzi. Ezekiel also came from a lineage of priests.

He states his first encounter with God was "in the thirtieth year." Scholars assume this refers to his age.

Ezekiel turned 30 about five years after the Babylonians exiled King Jehoiachin from the Kingdom of Judah.

The Babylonians captured Jewish people during the Babylonian captivity period. As a result, Ezekiel and his wife lived along the edge of the Chebar River, with other citizens from Judah.

Years as a Prophet

Ezekiel became a prophet after having a vision of God. After his first vision, Ezekiel prophesied for five years, often speaking of Jerusalem's destruction. He stated destruction would also befall the temple.

Another prophet who lived at the same time as Ezekiel was Jeremiah. Jeremiah had similar prophecies to Ezekiel's.

The skeptics made fun of them, but when the Babylonians stormed Jerusalem and took control, the prophecies came to pass.

Ezekiel is also the author of the Book of Ezekiel in the Bible. Ezekiel 1:1 refers to his age. Due to this, scholars note he was 50 years of age when he had his final vision. Scholars worked out that Ezekiel prophesied for more than 22 years.

The Jews believe Ezekiel to be in the bloodline of Joshua.

Muslims also recognize Ezekiel as a prophet of Islam.

Many churches worship the prophet, Ezekiel. These include the Roman Catholics, Protestants, and the Bahai Faith.

Ezekiel's tomb resides in southern Iraq and is his burial site. Muslims and Jews alike pay homage to the tomb. Although united in the past, since the Jews have gone from Iraq, they no longer visit the grave.