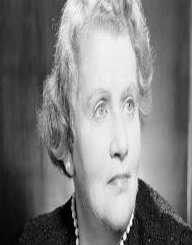 Enid Lyons was one of Australia’s most famous and popular female politicians. Her political journey started early because she was the former first lady having been involved in several party campaigns for her husband.

Besides, Enid Lyons was involved in several official duties during her husband’s tenure as the Australian Prime Minister. Having been the first woman in the Australian history to be elected to the House of Representatives and to be appointed to the federal cabinet, Enid Lyons was, indeed, the most celebrated female politician of her time.

Enid Lyons was born as Enid Muriel Burnell on 9th July 1897 in Smithton, Tasmania to Mr. William Burnell and his wife Eliza Burnell, an activist. Her star sign was Cancer. She was the second child in a family of four and had two sisters.

During her childhood, her father, a sawyer by profession, moved, alongside his family to Stowport. As a young girl, she revealed a dramatic talent in her school. The family later moved to Cooee where her mother opened a post office and a store.

Enid Lyons was enrolled in Burnie State School for her primary education. As a pupil, she was highly ambitious and industrious just like her mother.

Having completed her studies, she was enrolled at a Teacher’s Training College in Hobart where she successfully studied to become a professional teacher. Besides, she was also trained in elocution and became an eloquent speaker. In 1914, Enid was posted to Burnie State School where she worked as a junior teacher.

Enid LyonsEnid developed a strong interest in politics after marrying Joe Lyons, a politician and later Australia’s Prime Minister. In 1922 and as a mother of six children, she actively participated in Tasmanian election campaigns. She campaigned for her husband, especially among women. Enid Lyons husband won the election becoming the premier in 1923. In 1925, Enid Lyons stood for the seat of Denison. She strongly conducted her campaigns at the time when the country was faced with a whooping cough epidemic which had also attacked five of her children. However, she lost the seat by a margin of sixty votes only.

In 1929, her husband moved to the House of Representatives. During this time, her interest in politics further increased. She supported his political ambition, and in 1932, he became the Australian Prime Minister. As the first lady, Enid’s political activities increased, and she traveled a lot around the world attending several meetings and making speeches. This further improved her political experience.

After her husband’s death in 1939, she entered active politics having been encouraged by her family. Enid later announced her intention to offer her candidature for the House of Representatives and 1943; she was elected a member of the Tasmanian seat of Darwin. Enid Lyons made history as the first female member of the Australian House of Representatives. Because of her great oratory skills, she voiced her opinions on various topics including maternity services, widows’ pension, service women’s pay, social security, housing, among others. This made her much famous among the Australian citizens. As such, she was re-elected for two consecutive terms, i.e., in 1946 and 1949.

In 1949, the Menzies government appointed her the vice-president of its Executive Council. However, her health started deteriorating during this time, and she finally retired from active politics in 1951. A few months later, her health condition gradually improved and she worked as a Newspaper columnist in the same year (1951). Between 1951 and 1962, Enid served as the Australian Broadcasting Corporation Commissioner. She was also the author of three memoirs including The Old Haggis (1969), among others.

In 1980 (on Australia Day) Enid Lyons was made a Dame of the Order of Australia (AD) becoming the second woman to receive this award. In 1951, she was made an Australian College of Nursing Honorary member.

In April 1915, Enid Lyons married Joseph Lyons, a rising Tasmanian Labor politician who was impressed by her bold and ambitious character. She was just seventeen years old at the time of their wedding while Joseph was 35.

The couple lived successfully and was blessed with a total of twelve children, one of who died at the age of ten months. Despite her busy political career, Enid was still able to maintain her role as a dedicated mother and a devoted wife and perfectly balanced her political and family life.

Although her health condition started deteriorating in 1949 which made her retire from her political career, Enid’s health later improved and Enid Lyons worked for another 20 years in the public sector.

However, during her later years, she suffered from numerous health problems including a thyroid issue and cancer, and on 2nd September 1981, she finally died at 84 years of age and was accorded a state funeral in Devonport, Tasmania. She was later buried at Mersey Vale Lawn Cemetery next to her husband.