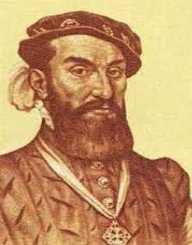 Álvar Núñez Cabeza de Vaca was an explorer born around the year 1490 in Extremadura, Castile, Spain. At one point he acted as the treasurer to one of the Spanish expeditions that landed in the current Tampa Bay Florida. This was around the year 1528. During the expedition, Álvar lost most his colleagues as most of them had died. Therefore, on the by the September of 1528, he and remaining explorers got to Galveston, Texas. Upon arrival, they settled down and lived with the natives for almost four years.

Álvar took up roles as doctor and a trader among the locals. Later, around the year 1532, Álvar and the three men from his party left. Together, they made their way through Texas all the way to New Mexico. However, they had the notion of getting to Mexico. In Mexico, they were hoping to connect with other Spanish representatives. In the year 1536, almost four years later after leaving the settlement, they met other Spaniards.

The Spaniards they met had a mission to enslave and capture natives. Álvar was not happy by how the other Spaniards were handling the natives. So, upon his return to Spain in 1537 he spoke up about changing the Spanish policy in America. Álvar in his time got to be a governor in one of the provinces in Mexico. However, later he became a judge back home in Seville.

Álvar Núñez Cabeza de Vaca was born around the year1490. He was the son of Teresa Cabeza de Vaca y de Zurita and Francisco Núñez de Vera. Also, Álvar was born in the town of Jerez de la Frontera, Cádiz, Spain. The family was of noble blood. However, they were too poor.

Moreover, Álvar’s parents died while he was still a young man. So, some of his relatives took him in their care. As a young man, Álvar got to be a chamberlain at one of the houses of a noble family.

Later he would take part in the conquest of the Canary Islands. Due to his remarkable efforts in life, Álvar was later appointed the governor. Then sometime later in the year 1511, he got the chance to serve in the army. During his army days, he served with a distinction. Therefore, the military awarded him several medals.

Consequently, he became a famous person in Spain. So, in the year 1527, he left with some expeditions to the new world. On the voyage, Álvar was the treasurer of the group.

Sometime in the year 1527, the king gave Panfilo de Narvaez instructions to go and explore Florida. By then it was a new place that most Europeans had not seen before. Therefore, together with his team he set sail for the modern world. Alongside him was Álvar. He was given the position to serve as the marshal and the treasurer of the expedition. The five ships on the voyage set sail for the new world.

However, on the way, they had to make stops at Hispaniola to resupply their ships. At the stop, they lost most of the men they had come with because they had chosen to stay. Although having lost most of his men, Narvaez continued with the journey. On, the second league of the trip there was a storm that destroyed both ships resulting in loss of other men. They were able to salvage some of the property and save some men. Then they continued with the journey. Later they set anchor near Jungle Prada Site.

After landing there and making a claim of the land in the name of the Spain they talked to the locals. They got to learn of a place with a lot of gold and food. So, Narvaez chose to split the men into two different groups. However, the idea did not sit well with Álvar.  However, they ended up going on their separate ways anyway. Álvar would continue to Florida while Narvaez would proceed on foot to the wealthy village on land. Álvar went on to reach Florida and stayed their four years among the locals. There he worked as a doctor and a trader. However, later he chose to move to Mexico to join other Spanish settlers. After that, he decided to go back to Spain in the year 1537.

Sometime in the year 1540, Álvar got the appointment to adelantado of the Río de la Plata in South America. So, he went back to America. Also, he was told to look for new pathways that would link his colony to that of Peru. So, he organized an expedition to handle the same. Around the year 1542 in March, Álvar met the governor Domingo Martinez de Irala. After that Álvar took over as the governor. There was a sense of unsettling emotions from the former governor Irala. So, he accused Álvar of being sympathetic to the Natives more than his people. Therefore, Álvar lost his general support from his people. Irala then placed Álvar under arrest in 1544. He had claimed that Álvar was handling the matters of administration poorly. Álvar was then sent to Spain for trial. However, he managed to beat the charges easily.

After that farce with the Spaniards in the New World, Álvar never went back to America. During his last days, he took up writing. So, he wrote about the Río de la Plata colony in South America. Mostly, he was writing on how he was displeased by the ways of Irala. In the year 1560, Álvar Núñez Cabeza de Vaca died a poor man in Seville.