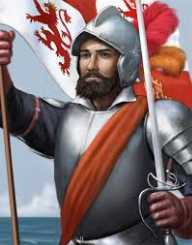 Vasco Nunez de Balboa is one of the early 1400's explorers to sail through the Pacific oceans. He was born in the year 1475 in the beautiful nation of Spain. Balboa was also a conquistador. This bear the meaning that he was one of the leading players who helped in establishing Darien Town in Panama. Therefore, Balboa became one of the first interim governors. However, during the year 1513, while he was out on an expedition in the Pacific Ocean, Pedro Aria de Avila got the full title-ship of the governor from the king. The new governor was jealous of the achievements of Balboa and put him up for execution. This was in the year 1519, just a few years after he had helped in building Darien town.

Vasco Nunez Balboa was born in the year 1475 in Jerez de los Caballeros somewhere in the province of Extremadura in Castile Spain. He had a love for the sea and line of adventure as a young man. Therefore, when he was of age, he went out to explore the waters. This gave him the opportunity to become the first European ever to lay his eyes on the Pacific Ocean. Moreover, due to the exploratory nature of the Spanish, they were out looking for fortunes in the new world. So, he made it a point by joining one of the exploratory ships to the Americas.

They made their way to South America and exploring modern-day Colombia. He fell in love with the coastal shore of South America and stayed at Hispaniola. This is the present Dominican Republic also famously as Haiti. However, his stay at the coast did not go well. Balboa soon fell into serious debt with the locals and countrymen. He opted to stow away in one of the ships and went to the San Sebastian Colony. However, upon his arrival, he noticed that most of the people were dead.

The local tribe's men slew most of the foreigners. Due to his charming and aggressive nature, he took control and led the remaining people west of the Uraba Gulf. Upon their arrival, they set down to build up Darien town. The chosen location was a small strip of land that was the only connection between the North and South America. His leadership skills led to his appointment as the interim governor of the Darien.

After staying at Darien town for some years, Balboa went on an expedition down to the South. He hoped to discover the new sea that people were always talking about and search for gold. Moreover, he had high hopes of gaining the favor of the King of Spain, Ferdinand. Bilbao's hopes were dashed by not finding any precious metals. However, he brought back much pride to be amongst the first Spanish to ever sail the Pacific Ocean. He made sure that he laid claim of the whole shore for the future Spaniards colonists.

Vasco Núñez de Balboa got married to María de Peñalosa who was one of Pedrarias' daughters. The wedding took place through the interception of the Bishop de Quevedo and Isabel de Bobadilla. This was a move by the two to cool the rivalry down between the Balboa and Pedrarias'. Moreover, the marriage took place by proxy.

Moreover, they were to meet because Balboa was never to return to Spain. Balboa had some sense of affection towards his father-in-law. However, their relationship hit the rocks only after two years. They then went back to their rivalry.

During the return from one of his many exploratory voyages, Balboa was arrested by the men of Pedrarias. They were accusing him of trying to overthrow the government and usurp power by building a new colony in the South Sea. He denied all the charges that were hounding furiously, but his pleas fell to deaf ears. The governor ordered an immediate trial in the year 1519 January 15th.

His execution came immediately the same month alongside his four other close companions. They were decapitated by chopping off the head. Some say that their heads were hung out in public for days to come. They were there to serve as a warning to anyone that would try to contradict the governor. Nobody knows where the remains of the famous explorer lie.

Despite having to die in such a gruesome manner and so early I life Balboa legacy still lives on. He is one of the first Europeans to sail the Pacific ocean. He is remembered as one of the greats both in Spain and Panama. Moreover, many of the streets of Panama and parks bare the of the selfless explorer. He also has his likeness published on the cent of the Panamanian dollar. These are but the few among many honors that his name still enjoys.