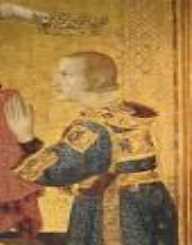 Robert of Naples was not only the King of Naples but also served as the ruler of Jerusalem from 1309 to 1343. He also adapted the title to the Duke of Calabria during his father’s time. During his reign as a king, he was given the nickname “the peace-maker of Italy”.

King Robert’s first marriage was to Yolanda of Aragon, the Duchess of Calabria. They married on March 23, 1297, but she did not become the Queen of Naples since she died before Robert could ascend the throne. Yolanda was the daughter of Constance of Sicily and Peter III of Aragon. Yolanda and Robert had 2 sons together: Charles and Louis.

His second marriage was to the daughter of King James II of Majorca, Sancia of Majorca. They wed by proxy on June 17, 1304, and the actual wedding took place on September 20 of the same year. Robert and Sancia’s union was childless however he had 3 other children out of wedlock. The recorded names of his children were Charles d’Atrois, whose mother was Cantelma Cantelmo, Maria d’Aquino whose mother was Sibila Sabran, and Helene.

Born in the Kingdom of Naples around 1276 as Robert of Anjou, he was the third child of Mary of Hungary and Charles II of Naples. Charles II was the son of Charles of Anjou, which makes Robert’s father the incumbent King. He has an older brother named Charles Martel of Anjou.

When he was a child, Robert was held as a hostage by Peter III of Aragon, the enemy of his grandfather. His grandfather eventually died in Italy that led to Robert’s father, then a hostage, to ascend the throne. His father was then crowned as Charles II, King of Naples.

In 1295, Robert’s older brother died which made him the heir to the crown of Naples. To obtain the crown of the neighboring island of Sicily, he married Yolanda, the sister of the then-King James of Sicily. Thanks to this union, King Robert established as the center of early Renaissance culture the Kingdom of Naples.

Robert’s regime as a king began when he ascended the throne on May 5, 1309. In 1311, he was opposed to Emperor Henry VII’s occupation in Rome as well as his stay in Italy. 2 years later in 1313, King Robert was assigned as the Senator of Rome bestowed upon him by the pope.

Robert of Naples also became Lord of Brescia in 1319 and then the city of Genoa for 16 years starting in 1318 until 1334. He also held the papal title of Italy’s Imperial Vicar when the Holy Roman Empire was absent for a time.

King Robert besieged the town of Saluzzo when it was caught between his nephew Thomas II and Manfred V in 1336.

Upon his death at the age of 67on January 20, 1343, King Robert was succeeded by his granddaughter, sixteen-year-old Joanna I of Naples who was already engaged to Andrew of Hungary, her cousin. In his last will, Robert explicitly stated that his granddaughter Joanna is the sole heiress to the crown in her own right and will be succeeded by her legitimate child. If she were to die or was unable to ascend to the throne, then her sister Maria will do so and will be succeeded by her legitimate child as well.