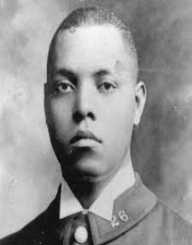 George Poage was born on November 6, 1880. He was an African American athlete. He was renowned for being the first African American to win a medal in the Olympic Games. He died at the age of Eighty Two years.

George Poage was born George Coleman Poage on November 6, 1880, in Hannibal, Missouri. In 1884, he alongside his family moved to La Crosse, Wisconsin. He was born to James Poage and Mrs. Poage. He was brought up alongside one sibling. In 1988, he alongside the remaining family member moved in with Mary and Lucian Easton after the death of his father.  He later joined La Crosse High School where his love for athletics grew.

In 1899, he became the class Salutatorian hence becoming the first African American to graduate from the school. He later joined the University of Wisconsin. In 1900, his first track race was against the freshman track squad in the university. He then joined the Track and Field team of the University. He ran Short Sprints and hurdles hence becoming the first African American to run for the University of Wisconsin. In 1902, he became the head in charge of track team after their coach went out of town.

In 1903, George Coleman Poage graduated with a History Degree. He again returned to the school for extra History graduated classes. He later became the football team athletic trainer. In 1904, he was the very first Big Ten track African American champion. He was then sponsored by the Milwaukee Athletic club to compete in the 1904 Summer Olympics which was held in St. Louis in Missouri. He later won the bronze medal after participating in four events in the competition.

George Coleman Poage was considered the first African American to win a medal. He later became a School Principal in St. Louis. He after that taught in Charles Summer High School. Here, he also served as the English Department head and taught Latin, Literature and English composition. He was also the school’s sports team coach. In 1914, he quit the duties at Charles Summer High School. In 1920, he went and worked as in restaurant in Chicago. In 1924, he became United States Postal Service’s Postal clerk. In 1954, he retired.

On April 11, 1962, George Coleman Poage died in Chicago, Illinois, United States. He died at the age of Eighty two years.