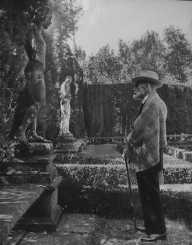 Bernard Berenson was born on June 26th, in 1865. He was famous for being an American art historian. In his career field, he took a special interest in the Italian Renaissance. The most notable work that earned him nationwide recognition was called The Italian Painters of the Renaissance. Berenson is also credited for paving the way for a good market for early paintings with the Old Masters. During the 20th century, he stands to be remembered as one of the main art collectors at this time.

At the time of Bernard Berenson birth on June 26th, 1865 he was given the name Bernhard Valvrojenski. His place of birth was in Butrimonys in Lithuania. He was the son of Albert and Julia both of whom were Lithuanian Jews often called Litvaks. In 1875, his family migrated to Boston, Massachusetts. It is while residing here that they adopted ‘Berenson’ as their official family name. In 1885, Bernard Berenson converted into a Christian. Years later, when he was residing in Italy, he again converted into a Catholic.

By 1890, Bernard Berenson had become a notable art dealer. During this time, he mainly scouted good artworks for his friend named Jean Paul Richter, an art historian. He also offered similar services to Edward Perry Warren and Otto Gutekunst. The latter was an art dealer from London.

Two years later, Bernard Berenson began working independently as an art dealer. Around this period, he assisted James Burke, a British collector in getting his hands on Impressionists works as well as Piero di Cosimo’s painting. Later, in 1894, Berenson’s book The Venetian Painters of the Renaissance with an Index to their Works, featuring renaissance art was released. This work was appreciated out there as it represented his extensive knowledge in the art. The following year, he was immensely successful with the release of Lorenzo Lotto, an Essay on Constructive Art Criticism. Another masterpiece followed in 1896 dubbed The Florentine Painters of the Renaissance. This work was praised all over by scholars including philosopher William James who attested to the fact that Berenson’s work was innovative.

Bernard Berenson did not stop there, in 1897, he released another one of his famous work The Central Italian Painters of the Renaissance. He later took a break to work on his greatest piece called The Drawings of the Florentine Painters that was later published in 1903.

During one of his trips to England, Bernard Berenson crossed paths with Mary Smith after which he fell head over heels for her. At this time, Smith was already hitched to Frank Costelloe, a British politician. However, she also expressed her feelings to Berenson. Smith parted ways with her husband. She left him with the two children they had together. In 1900, Berenson wedded Mary Smith.

Unfortunately, soon marry had eyes for another man. This prompted Bernard Berenson to engage in affairs with the likes of Belle da Costa Greene, Elisabetta Mariano, and Baroness Gabrielle.

Bernard Berenson died on October 6th, 1959. He died at an old age of 94 years after having enjoyed success for the most of his life.