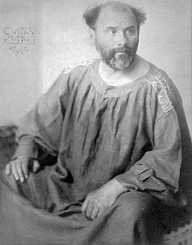 Gustav Klimt was born on July 14th, 1862. He was born in Baumgarten, Vienna. He was the founder of Vienna Secession, which was art movement. Through his exceptional artistic skills, Klimt dominated the 19th century as he mainly brought a change to the world of traditional art. He majorly advocated for modern art. Some of his eminent paintings are Portrait of Adele Bloch-Bauer and The Kiss. Klimt died at the age of 55.

Gustav Klimt was born in the Austrian Empire in 1862. His parents were Ernst Klimt and Anna Klimt. His father was famous for his engraving skills. Klimt was the second child in a family of seven. His younger brothers also displayed artistic talents right from the time they were young. Despite the fact that Klimt was born in a poor family, he earned himself a scholarship to the Vienna School of Arts and Crafts.

While studying at the school of arts, he primarily focused on architectural painting. The training that he received on art was also classical but Klimt did not reject it. After all, his main career path was to become an art teacher. With time this changed as his knowledge on art broadened.

Gustav Klimt made good use of the little commissions he earned through the sale of his works of art. After his graduation from the institution in 1883, he paired with his younger brother, Ernst in opening up their art studio. They also worked with one of their mutual friends Franz Masch.

With a clear focus on what they were supposed to do, the trio went ahead to call themselves Company of Artists. As part of ensuring that they were successful in their mission, they resorted to set their artistic demands aside and work as a team. Well, the idea worked in their favor as they landed commissions in the jobs they worked on during this period. By now they were the ideal group chosen to paint public spaces, churches, and theatres. A famous wall painting that they did was at the Vienna Burgtheater. They also did a remarkable job at the Kunsthistorisches Museum. In 1888, the trio was awarded for their efforts and achievements they had made so far. They were bestowed with the Golden Order of Merit by Franz Josef I, Austro-Hungarian Emperor.

Two years later the group went ahead and joined the Vienna Artists’ Association. This was an art group that mainly controlled exhibitions in their home city. However, it did not take time before Klimt deviated from the group and began working on his career.

A series of events occurred in 1891 after Klimt’s brother wedded Helene Flöge. A few months after meeting his brother’s wife, he met with Helene’s sister, Emilie, and together they bonded forming a strong relationship right from the beginning. Gustav Klimt went ahead and drew the portrait of Emilie. In 1892, his father and brother passed away. This devastated him, and he later changed his artistic perceptions. He gained the impression that it was better to stick to a personal artistic style rather than concentrating on conventional forms of art.

The group that he had earlier formed with his brother kept growing and landed jobs here and there. For instance, in 1894, they were picked as the ideal group of artists that would paint the Great Hall theatre at the University of Vienna. Not long after, Gustav Klimt and other artists joined hands and formed another group and called it Vienna Secession. The group was rebellious to traditional forms of art as they went ahead to promote young and talented nontraditional artists. With time, they began exhibiting new and modern works of art by its members. Around this period, Gustav Klimt was chosen to serve as the first president of the association. After a year, they hosted their Vienna Secession exhibition for the first time which was a major success as it gained popularity within a short time.

Gustav Klimt continued to succeed in his artwork more so during the early 1900s. Medicine was exhibited around this time in Paris and Klimt was later bestowed with the Grand Prix. Shortly after this exhibition, Beethoven Frieze pulled attention from all over after being released to the public in 1902. Other works that were highly applauded at this period were "Judith"- 1901, "Danae"-1907 and "The Kiss"-1908.

Gustav Klimt had a long-term affair with Emilie Louise Floge. Their relationship gave them 14 children.

On February 6th, 1918, Gustav Klimt passed away after suffering from pneumonia and stroke. He departed this life at the age of 53.