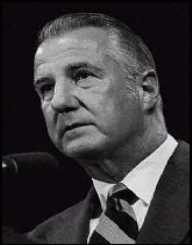 Spiro Theodore Agnew was born on November 9, 1918, in Baltimore, Maryland. His father was a Greek immigrant, but his mother was a native of Virginia. Agnew attended the Forest Park Senior High School, and in 1937 enrolled at Johns Hopkins University. There he studied chemistry for three years. In 1941, he had to leave school, since he was drafted into United States Army. After finishing his training at the Army Officer Candidate School, he began serving in the 10th Armored Division in Europe. For his service, Agnew was awarded the Bronze Star.

Before Agnew left for his army service in Europe, he met Elinor Judefind at the Maryland Casualty Company, where he was working at the time. The couple married in 1942 and had four children. after returning from was, Agnew began to study in the evening program at the University of Baltimore School of Law. During the day he was working as a grocer and as an insurance salesman. In 1947, he graduated with a Bachelor of Laws. After passing the Maryland bar exam in 1949, he began working as a lawyer. However, in 1950, he was recalled to serve in the army during the Korean War.

Agnew’s first steps into politics was as the president of the Loch Raven Community Council. After serving in this capacity, he went on to be the President of the Dumbarton Junior High School PTA. From his early youth he was a Democrat, but during the early 1950s switched to the Republican party. He began working with the U.S. Congressman James Devereux and helped him to win elections in 1950s.

In 1957, Agnew became a member of the Baltimore County Board of Zoning Appeals. Three years later, Agnew made his first attempt to run for office, with his candidacy for Judge of the Circuit Court. He lost the election, and the following year, in 1961, he was dropped from the Zoning Board. In 1962, he ran for office as the Baltimore County Executive. The predominantly Democratic county had not seen a Republican to be elected to this position in the 20th century, however, using the spilt of the Democratic party at the time, he got elected.

In 1966, Agnew ran for the position as the Governor of Maryland. He won the governorship by 82, 000 votes. In this position, Agnew worked to pass several tax and judicial reforms and anti-pollution laws. He also signed the first open-housing laws of the state and repealed the anti-miscegenation law. In 1968, Agnew became the running mate for the Republican presidential nominee Richard Nixon. Until 1968, Agnew was a strong supporter of Nixon’s opponent, Nelson Rockefeller, but then switched to supporting Nixon. Many conservatives supported Agnew's nomination.

Agnew’s political career was one of the fastest rises in American history since he went from County Executive to Vice President position in just six years. As the vice president, Agnew became the voice of the silent majority. He also became known for voicing his criticism against his political opponents, journalists, and war activists.

Despite Agnew being so-called Nixon’s hatchet man and his continuous loyalty to the Nixon administration, their relationship began to deteriorate since the very beginning of their affiliation. Agnew felt that Nixon lacked the intelligence and vision, especially in foreign affairs. Reports claimed that Nixon was also jealous towards Agnew being so popular amongst Americans. By 1970, Agnew only saw Nixon during cabinet meetings, and he was not given the opportunity to discuss his ideas.

In 1971, Nixon and his chief of staff were discussing how to get Agnew to resign from his office. Nixon also wanted to replace Agnew on his 1972 election ticket but realized that Agnew has a large base of Republican supporters. Agnew used the privileges of being rich and famous and made friends with many artists. He was often invited to give speeches and became the top fundraiser for the Republican Party. When the Watergate began to surface, Agnew was seen as the top runner to be the next Republican nominee for President.

George Beall began an investigation of corruption in Baltimore County, Maryland. He found that one contractor stated that he had been paying Agnew for years in exchange for contracts when Agnew was the county executive, governor and also Vice President. Some other witnesses came out, and documentation detailing corruption came out which prompted Agnew to resign from the office.

Agnew was charged with tax evasion and accepting more than $100 000 in bribes. He pleaded no contest and was fined $10 000 and three years’ probation. The public widely mocked the fine, and in the end, Agnew wrote a check of $ 268, 482- the amount he received in bribes.

After the end of his political career, Agnew went into the private sector. He became the international trade executive in Rancho Mirage, California, later working in Arnold, Maryland and Ocean City, Maryland. In 1980, he published a memoir in which he implied that Nixon and his Chief of Staff were planning to assassinate him in case he refused to resign as Vice President.

Agnew died on September 17, 1996, at the Atlantic General Hospital. He had undiagnosed acute leukemia.