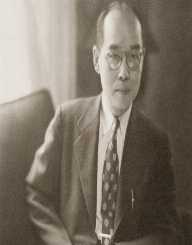 Hideki Yukawa was a theoretical physicist from Tokyo, Japan. He was the first Japanese to be awarded a Nobel Prize, which he earned in 1949.

Born Hideki Ogawa on 23rd of January 1907, in Tokyo, Japan. He was the fifth child in the family. The Ogawa family had five sons, and two daughters who were older than Hideki. The father, Takuji Ogawa hailed from a Samurai clan but later became a family of academicians, Takuji himself was a professor of Geology. Feared that Hideki was not proficient in academics, Takuji had planned to enroll his son into technical college.

Although Hideki Yukawa was deemed as average by his father, Hideki studied in Third High School in Kyoto and graduated there. He was accepted into Kyoto Imperial University and graduated in 1929 from the Science Faculty.

Hideki Yukawa married Sumi Yukawa in 1932, and in accordance to Japanese Customs, he was adopted by his father-in-law and changed his surname to Yukawa. The twenty-two-year-old was known since as Hideki Yukawa, and the couple had two sons.

After Hideki Yukawa graduation in 1929, Hideki was employed as a lecturer at Kyoto University, where he developed an interest in the theory of elementary particles. In 1933, he moved to Osaka University to become an assistant professor. Hideki Yukawa published his famous article in 1935, where he proposed a new field theory in nuclear forces. In the article, Hideki proposed a possible existence a carrier particle between protons and neutrons, calling it the carrier meson in his writing On the Interaction of Elementary Particles.

Hideki Yukawa got his Doctor of Science degree in 1938. A year later, he was made Professor of Theoretical Physics at Kyoto University, where he stayed between Kyoto and Osaka for lectures and research. In 1946, he became founder and editor for journal Progress of Theoretical Physics. He dedicated most of his research on elementary particles with the concept of the nonlocal field since 1947, and theory of K- Capture, where a low energy electron gets taken in by the nucleus.

Travelling to America in 1948, Hideki Yukawa was a visiting professor in Princeton, teaching and researching the Institute for Advanced Study. The following year, he gained a position as professor of Physics at the Columbia University, where he stayed until 1953. Kyoto University founded the Yukawa Institute for Theoretical Physics in 1953, and Hideki returned to become its first Chairman, serving until his retirement in 1970. He continued to edit Progress of Theoretical Physics until his death.

Aside from the journal, he published two books: Introduction to Quantum Mechanics and Introduction to the Theory of Elementary Particles. He was a co-signer with ten other scientists in the Russell- Einstein Manifesto, supporting nuclear disarmament in 1955. Hideki Yukawa died of pneumonia and heart failure, on 8 September 1981. He was seventy- four years old when he passed away at home in Kyoto. He was buried in Higashiyama-Ku, Kyoto.

Hideki Yukawa was awarded his first The Imperial Prize of the Japan Academy in 1940, followed by Decoration of Cultural Merit in 1943 by the government. Hideki Yukawa was the winner of the 1949 Nobel Prize for Physics and the Lomonosov Gold Medal in 1964. He was also made Grand Cordon of the Order of the Rising Sun in 1977, owing to his contribution in the field of Theoretical Physics.