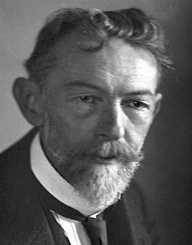 German biochemist Eduard Buchner was born on the 20 May 1860 in Munich. His father, Ernst Buchner, was a physician as well as a professor of forensic medicine at the University of Munich. His mother was Friederike née Martin.

Eduard Buchner attended the Grammar School in Munich and after graduation studied at the Munich Polytechnic under E. Erlenmeyer in his chemical laboratory.

After his studies at the Munich Polytechnic Buchner worked at a preserve and canning factory at Mombach on Mainz. Then in 1894, he returned to his studies under Adolf Von Baeyer (Chemistry) and Professor C. von Naegeli at the Botanic Institute in Munich.

His brother Hans Buchner was a bacteriologist, and it was under his supervision that his first publication appeared: The Influence of Oxygen On Fermentations (1885). Buchner’s research into organic chemistry was helped by H. von Pechmann and T. Curtis, laboratory assistants.

The Philosophical Faculty then awarded Buchner the Lamont Scholarship, and this enabled him to proceed with his studies for a further three years. He was awarded his doctorate at the University of Munich in 1888. In 1889 he became an assistant lecturer in the organic laboratory of von Baeyer and 1891, Munich University appointed him a lecturer. Von Baeyer provided financial assistance for Buchner to set up a small lab to research the chemistry of fermentation.  During 1893 experiments were carried out on the rupture of yeast cells but after objections from the Board of the Laboratory, the tests were put on hold. The Board felt that the grinding of yeast cells had been sufficiently researched and described for decades.

It was during the autumn break of 1896 that he reactivated his research into yeast cells. Eduard Buchner did this at the Hygienic Institute located in Munich. His brother Hans was on the board of directors, and Buchner was able to carry out his research with the funds and facilities required to do the work. In January the following year, he presented his paper, On Alcoholic Fermentation Without Yeast Cells, to the Berichte der Deutschen Chemischen Gesellschaft.

Buchner was appointed a Professor of General Chemistry at the Agricultural College, Berlin in 1898. He also lectured on agricultural chemistry. In 1909 he worked at the University of Breslau, and in 1911 he was at Wurzburg.

Eduard Buchner, his brother Hans Buchner and Martin presented the results of his yeast research in 1903 and 1907, Buchner was awarded the Nobel Prize for his discovery of non-cellular fermentation.

Buchner was working in a field hospital during World War I when he was wounded on the 3 August 1917. He died on the 13 August 1917.