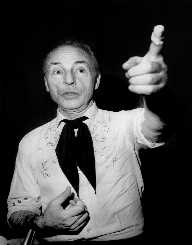 Choreographer George Balanchine was born in St Petersburg, Russia in 1904. His father, Meliton Balanchivadze, was a classical composer and Balanchine was exposed to music from a young age.

His mother, Marie Vasilyeva worked for a bank. The family had three children: Tamara, Georgi, and Andrei. Andrei became a respected Soviet composer.

At the age of five Balanchine started having piano lessons and by the age of nine, was a student at the Imperial Theater School in the ballet section. He began on stage in roles such as

The Sleeping Beauty. In 1921, he graduated with honors. As a student, he played the piano in silent movie houses. He also studied at the Petrograd Conservatory of Music.

After graduation, George Balanchine was accepted into the State Theater of Opera and Ballet, touring with the Soviet State Dancers.  Early in his training, he had become interested in choreography.

His first work was La Nuit which he choreographed to the music of Rubinstein. In the early twenties, he formed The Young Ballet which concentrated on experimental dance. This was frowned upon by traditionalists.  And in 1924, Balanchine when and three others were permitted to leave the Soviet Union to do a tour of Western Europe; they defected to the West.

By this time, Balanchine was focusing on choreography. He worked in Europe including Copenhagen and Monte Carlo. Then in 1933, he formed Les Ballets. He created six ballets, but the company only lasted nine months. George Balanchine was introduced to American Lincoln Kirstein, a wealthy arts patron who was intent on establishing a ballet company using American dancers and repertoire.

Balanchine was engaged to be part of the venture and arrived in the United States late in 1933. At the outset, they established the School of American Ballet, followed twelve months later by the American Ballet, a professional dance company. The debut of the American Ballet took place at the Adelphi Theater, New York in March 1935. It was around this time that the collaboration between Stravinsky and Balanchine began.

At the School of American Ballet, the forerunner of the New York City Ballet, Balanchine created many great works including Ballet Imperial, Jewels, Concerto Barocco, and Serenade. Kirstein said in an interview that the pair had worked together in perfect harmony without a contract or a quarrel. Their common aim was to modernize dance.

Balanchine once said that Russia is the home of the romantic ballet and America the home of classical ballet. He also choreographed 19 Broadway shows and four films.

Balanchine was regarded as the guru of American dance during his lifetime and today is considered to be the foremost choreographer of modern ballet. Balanchine left a legacy of 425 works.

In 1922, George Balanchine married Tamara Gevergeyeva, a ballet student who later became known as Tamara Geva when she was working as an actress in America. He was 18 at the time of their marriage, and she was 16.

His marriage to Geva broke down in 1927, and she subsequently went to the United States. Balanchine then got involved with another ballerina, Alexandra Danilova. He married Vera Zorina in the United States in 1938 and then Tanaquil LeClercq, divorced in 1969. All four of his wives were ballet dancers for whom he created ballets.

Balanchine contacted Creutzfeldt-Jakob Disease and died on 30 April 1983 of pneumonia at the Roosevelt Hospital. He was 79 years of age. His brother Andrei was still alive at the time of Balanchine's death and his sole surviving relation.

According to his obituary in the New York Times, George Balanchine is ranked alongside Stravinsky and Picasso as one of the  20th-century’s modern artistic greats. Stravinsky composed four ballets for Balanchine to choreograph and considered him a fellow musician