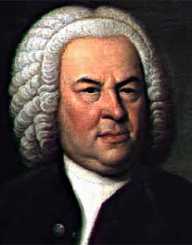 Johan Sebastian Bach was born on March 31, 1685, in Eisenach, the dutchy of Saxe-Eisenach. Bach came from a musical family since his father was a director of town musicians and several of his other relatives were musicians. He was the eighth child of his parents. When Bach was a child, his father taught him how to play violin and harpsichord. When Bach was ten years old, his mother died, and just eight months later his father also died.

After this tragedy, Bach moved in with his brother, who was at the time organist at St. Michael’s Church in Ohrdruf, Altenburg. He then began studying music. His brother told the young Bach how to play clavichord. During this time, Bach also learned theology, Latin, and several languages.

In 1700, Johan Sebastian Bach enrolled in the prestigious St. Michael’s School in Luneburg. During the two years, he spent in the school; Bach was exposed to a great deal of European culture. He began singing in the choir and also played the three0manual organ and harpsichord. He also had access to the St. John’s Church organ.

When Johan Sebastian Bach graduated from St. Michael’s, he was offered an organist post at Sangerhausen, which he turned down. Instead, he became the court musician for the Duke Johann Ernst III in Weimar. After just seven months at the court, he garnered an excellent reputation as a keyboardist. He was often invited to inspect and inaugurate new organ. Despite his skills and connections, there were a lot of tensions between Bach and the authorities. Bach was very demanding of the choir and had several conflicts with his peers.

In 1706, Bach got an organist post at the Blasius Church in Mühlhausen. He was satisfied with the position since he had a better choir, remuneration, and other work conditions. Soon after arriving at Mühlhausen, Bach got married to Maria Barbara Bach, who was his second cousin. During his time there, he wrote the cantata Gott istmeinKönig.

Johan Sebastian Bach left Mühlhausen in 1708 and returned to Weimar as an organist, later working at the director of music at the court of the duke. During this time he began composing many keyboard and orchestral works. He also transcribed several Vivaldi’s strings and wind concertos for the organ and harpsichord. Bach worked on preludes and fugues which were assembled in his work The Well-Tempered Clavier.

One of the most significant works from this time was his Little Organ Book of Lutheran chorales. In 1713, he was offered to work in Halle at the Market Church of Our Dear Lady for the inauguration of the organ. During his time in Weimar, Bach composed his first three cantatas. He left the post in 1717 following a fallout with his employers and was unfavorably discharged from his post.

After his dismissal from Weimar, Johan Sebastian Bach was offered a post from Leopold, Prince of Anhalt-Köthen as the Kapellmeister. The Prince was a Calvinist, and during his time there Bach wrote mostly secular music. He wrote several orchestral suites, cello suites, sonatas and violin solos. In 1720, while he was on a trip with Prince Leopold, Bach’s wife died. The following year, he met and married Anna Magdalena Wilche with whom he had thirteen children.

In 1723, Bach got a new appointment at the Thomaskantor, Cantor in Leipzig. The institution provided music for four other churches in the city and was the leading cantorate in Protestant Germany. Bach held the post for 27 years and gained a lot of prestige. As a part of his work duties, he had to instruct the students of Thomasschule in singing. During his time in Leipzig, Bach composed more than three hundred cantatas. In 1729, he became the director of the Collegium Musicum- a private establishment by musically active university students. The institution performed in various venues around Leipzig.

In 1733, Johan Sebastian Bach made a further advancement in his career by composing the mass for the Dresden court. He was then appointed as the Court Composer. In 1747, while visiting the court of King Frederick II of Prussia, Bach was challenged by the king to improvise a fugue based on his theme. His three-part fugue was later presented as the Musical Offering consisting of fugues, canons, and trios.

Bach joined the Corresponding Society of the Musical Sciences in 1747. For his entry, he composed Canonic Variations on “VomHimmlehoch da komm’ ich her.” One of his latest works was The Art of Fugue, consisting of 18 complex fugues and canons. His most extensive work from this time was the Mass in B minor, which became known as his most stellar church work.

Johan Sebastian Bach's health began to decline in 1749. His employers started looking for a music director replacement for his eventual passing. He became blind and was operated on by British surgeon John Taylor in 1750.

Bach died on July 28, 1750, at the time being 65 years old. His death was due to complications from eye surgery.