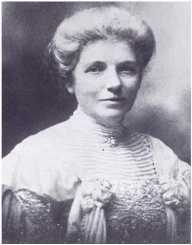 Leading New Zealand suffragette Katherine Wilson Malcolm was born in Liverpool, England on the 10 March 1847. Her Scots parents were Andrew Wilson Malcolm and Jemima Crawford Souter. After Andrew Malcolm died in 1862, the family emigrated New Zealand, arriving on the vessel the Matoaka in Lyttelton, South Island on the 8 February 1869.

Kate Sheppard was born in Liverpool but educated in Scotland. Her education for a girl at the time was considered right, and she was regarded as highly intelligent.

Raised in a deeply religious family, Kate Sheppard was a member of the Trinity Congregational Church, and it was through this that she became involved in the temperance movement. She helped found the New Zealand Women’s Christian Temperance Union in 1885. This involvement led her to realize that women’s suffrage was needed to push for legislative and social reforms to benefit women and children. In 1887 she was appointed the head of the NZCTU.

Kate Sheppard traveled nationally giving talks and lobbying politicians as well as working with local unions. She also authored pamphlets citing why women should be given the vote, and her younger sister Isabella helped and supported her in her activities. Suffrage bills were defeated three times in the New Zealand parliament (1888, 1891 and 1982) before Sheppard presented her last petition. It was also the most massive petition in New Zealand parliamentary history, with over 32,000 signatures.

On the 19 September 1893, the Electoral Act 1893 was passed in the New Zealand parliament giving women the right to vote.

Once having achieved the right of women to vote in New Zealand traveled to Australia, England and America encouraging and helping women in those countries to agitate for the vote.

In 1895 Sheppard was appointed an editor of The White Ribbon, a newspaper published and owned by women. Then in 1896, she set up the National Council of Women.

Kate Sheppard was a leader in the women’s suffragette movement in New Zealand which led it to become the first country in the world to give women the vote.

She appears on the New Zealand ten dollar note, and Heritage New Zealand lists her former home in Christchurch, New Zealand at 83 Clyde Road. During her time living in Clyde Road, many early suffragette meetings were held there.

There was a play about her O Temperance in 1972, and during 2016 another play entitled That Bloody Woman was staged nationally.

Other honors include a Kate Sheppard National Memorial on the banks of the river Avon in Christchurch, New Zealand and the Kate Sheppard Memorial Trust available to women working in research.

Kate Sheppard was married twice. Her first husband was Walter Sheppard whom she married on the 8 October 1888. The couple built a house at 83 Clyde Street, Christchurch and lived there between 1888 and 1902. They had one child together, a son Douglas (b.1880-d.1910).

Kate Sheppard died on the 13 July 1934 has seen the first woman elected to Parliament in 1933.