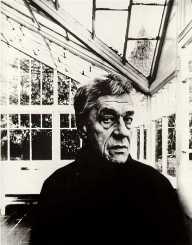 Bill Brandt was born as Hermann Wilhelm Brandt on 2nd May 1904. He was born in Hamburg, Germany and had three brothers. His father was British, while his mother was German. Brandt was born into a wealthy family, who worked in the banking sector.

He grew up in Germany during World War I, and when he was five, his father was imprisoned by the Germans for six months, for being a British citizen.

Soon after the war, Bill Brandt became ill with tuberculosis and spent a long period in a sanatorium in Switzerland. He also went to Vienna for treatment, and the practitioners eventually announced he was cured. It was while he was in Switzerland that Brandt took up photography.

He was then looked after by Eugenie Schwarzwald, who was a socialite at the time. During a visit by Ezra Pound, Hermann Wilhelm Brandt presented him with his portrait, and Pound offered Brandt an introduction to Man Ray. Ray was an American painter and photographer, who lived most of his life in Paris, France. Brandt worked in Man’s studio during 1929.

Bill Brandt moved to London in the early 1930s. He began to observe and document British society, and in 1936 his first book was published, called The English at Home. The book was about the economic and social conditions of British society at the time.

His second book, A Night in London, was published in 1938. He had taken night photographs during World War II, many without a flash, during times of blackout in London.

As well as publishing books, Bill Brandt also contributed to publications such as Harper’s Bazaar, Lilliput, and Picture Post.

In celebration of peace in 1945, he photographed a series of nudes. Although he published several more books, he mostly concentrated on nudes after this period. He became one of the most influential and celebrated photographers of the 20th century. He also, over the years, tried to disown his German heritage, trying to say he was born in England.

Bill Brandt published over a dozen books, including, Camera in London (1948), Literary Britain (1951), and Shadow of Light (1966). Books have also been published by others with Brandt’s photography.

His biography was written in 2004 by Paul Delany, called, Bill Brandt: A Life.

There have been three exhibitions of Brandt’s work. The first was in 2004 at the Victoria & Albert Museum, the second was in 2013 at the Museum of Modern Art, and the third was also in 2013 at the Edwynn Houk Gallery, New York.