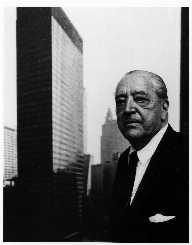 Ludwig Mies van der Rohe was a German-American architect who is commonly referred to as Mies. He is known to be one of the modern architect as well as the pioneer of the modern architecture. His ability to craft elegant and highly simply epitomized international style of architecture. His designs were known by many to be an exemplifying format of Less is More. He demonstrates a forthright in the use of the most modern tools at that period. With his exceptional and highly wonderful sense of proportion, he was able to create different architectures. Ludwig Mies has once called his buildings, Skin and bones architecture and always ready to sought an objective approach to creativity in architectural design. He was also known to have created an ultra modern twentieth-century architectural style that is very clear and simple.

Ludwig Mies was born in  Aachen, Germany on 27th March 1886. He was known to have helped his father who was then a master mason as well as owning a stonecutter’s shop. Mies did not receive any formal architectural training. At the age of 15, he became an apprentice under several Aachen Architects where he learned how to sketch architectural designs. It was then he practiced and learned how to draw and which he used in producing some of the finest architectural designs.

Ludwig Mies later went ahead to become an apprentice to Bruno Paul at the age of 19. His first project was a traditional suburban house which impressed Peter Behrens who was the most progressive architect in Germany as at then. This project got him a job with the architect. He later became a member of Deutscher Werkbund which was an English-German Association of Craftsman. He established himself among other craftsmen. The members decided to use new and innovative instruments which culminated to the internationally acclaimed architectural style.

Ludwig Mies got enlisted during the World War I to overlook the construction of bridges and roads in the Balkans. He later returned to Berlin in 918 where he joined several modernist architectural groups. Ludwig Mies organized and had many exhibitions. At this time, he had no project in his hand but a memorial building of murdered communist leaders, Karl Liebknecht and Rosa Luxemburg which were demolished by the Nazis. Most of his great and highly important works during this period were on paper only as sketches. He later had one of his first proposal built, a steel-and-glass building, The Friedrichstrasse Office bUilding. He also applied his idea of a glass skyscraper which is meant to be transparent façade revealing the underlying structure. He called it, The Glass Skyscraper.

His house demonstration project in which Europe’s 16 leading modernist architects designed various apartment building for the Werkbund Exposition in 1927. The exposition demonstrated how the different factions in the architectural sector had been merged as one. Though the exposition was not very popular, itwas critically acclaimed as the Europe elites suddenly began to commission modern villa. Ludwig Mies was later appointed the director of the Bauhaus which happens to be a school of art. There, he focuses so much on the invention of new forms of expression architecture, painting, and sculpture.

Later, Ludwig Mies moved to the United States where he joined the School of Architecture as a director. He had served as the school’s director before he retired after twenty years. Before he retired, the school has become one of the world-renowned school with a disciplined teaching method.  At the end of the second world war, his design of glass skyscraper was brought into reality with the Lake Shore Drive Apartments and Seagram Building. He continued building beautiful structures all over the country.

His works were a footprint in the architectural world ranging from his Friedrichstrasse Office Building to the Skyscraper made of glass and steel. Ludwig Mies is known for his principle, Skin, and Bones. He ignored many rules dictated in different guidelines and ensured that he creates his own. Although his works did not receive much attention then, he, however, has his style dominate the corporate architecture years later.

Ludwig Mies received from the Royal Institute of British Architects the Royal Gold Medal in 1959. He also received the AIA Gold Medal from the American Insitute of Architects in 1960. He received such awards later in 1976, 81 and 84 for his works which stood the test of time.

Ludwig Mies van der Rohe married Ada Bruhn, a daughter of a wealthy industrialist in 1913. The couple had three children but got separated in 1918. He fathered a son outside his marriage while he was away for military service in 1917. He later had a relationship with Lilly Reich which ended while he moved to the United States. He, however, died on 17, August 1969 after suffering from Cancer of the esophagus.