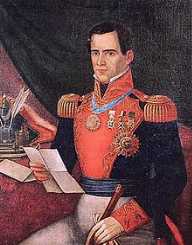 Mexican general and politician Agustin de Iturbide was born on the 27 September 1783 Valladolid. His family was of Spanish Basque ancestry, and he grew up in a wealthy, aristocratic family.

In 1810 the priest and revolutionary leader, Miguel Hidalgo y Costilla offered asked Iturbide to his join his army, but Iturbide decided to side with the royalist army. Once commissioned into the royalists, Agustin de Iturbide showed himself to be fearless and, at times, a ruthless officer.

By 1813 Iturbide was a colonel in the Celaya regiment. Agustin de Iturbide was also made military commander of Guanajuato. In 1815 he took over command of the Army of the North which covered both Guanajuato and Valladolid.

The revolutionary forces under General Vicente Guerrero were almost brought under control by 1820. Due to a liberal coup in Spain, the royalists in México, in an about turn, decided to side with the independence movement. Iturbide gained control of the army and entered into an alliance with Guerrero and the remaining guerilla groups under his control. Their military partnership became known as the Army of the Three Guarantees

In February 1821, Agustin de Iturbide and Guerrero set out an independence manifesto which was known as the Plan of Iguala. By doing so, they called for a constitutional monarchy. The idea was that Creoles would replace Spaniards in the civil service but that the colonial administration would remain with a Bourbon monarchy independent of Spain.

On the 27 September 1821, Iturbide led his army on a victory march into México City.

Finding a Spanish prince to accept the role of leader of Mexico proved problematic. The Mexican Creoles then started to push for Iturbide to be made the ruler and on the 19 May 1822, he became emperor of Mexico as Agustin I and his wife, Empress. By 1823 the alliance with Guerrero had fallen apart, and he withdrew to the southern region of México. Iturbide's army followed and defeated him.

Iturbide's autocratic rule was unsuccessful. When he dissolved Congress, a revolt resulted in his abdication on the 19 March 1823. At this stage, Guerrero returned and was appointed a member of the congress’s ruling triumvirate.

Agustin de Iturbide traveled to Europe, and while he was away, the Mexican Congress sentenced him to death on a charge of treason. Unaware of the death sentence he returned to Mexico where he was arrested. He was executed four days later. On the 19 July 1824. Guadalupe Victoria was elected the country’s first President and declared México a republic.

When Agustin de Iturbide was twenty-two years old, he married nineteen-year-old Ana María Josefa Ramona de Huarte y Muñiz on the 27 February 1805 Valladolid Cathedral. The couple had ten children. The marriage was not always happy and immediately before Iturbide becoming Emperor the couple had separated. They united for political reasons and stayed married until his death in 1823.