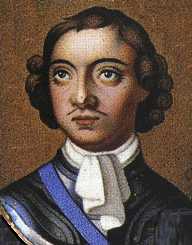 Early life and rise to power

Peter the Great (Peter I, Peter Alekseyevich) was born on June 9, 1672, in Moscow, Russia. His father was Tsar Alexis I. From an early age; several tutors educated Peter as a child. His father died in 1676, leaving the sovereignty to Peters older brother Feodor III. He was always a week, and sickly man and the government was run by Artamon Matveev, a friend of Alexis.

When Feodor died in 1682, having no children, a dispute arose between the Miloslavsky family, with Maria Miloslavskaya being the first wife of Alexis and his second wife’s family the Naryshkins. The council of Russian nobles decided to choose the 10-year-old Peter to become Tsar, with his mother as regent.

After the ratification of this decision, one of Alexi’s daughters from his first marriage, Sophia Alekseyevna led a rebellion of the Russian military corps the Streltsy. During this conflict, some of Peter’s relatives and friends were murdered, and he witnessed some of these conflicts. The rebellion made it possible for the Miloslavskys and their allies to insist that Ivan and Peter are both proclaimed joint Tsars. Sophia acted as regent during this time. In the dual-seated throne, used by Ivan and Peter, a large hole was cut, where Sophia would sit and join in the ruling process.

Peter the Great was not concerned about this situation and engaged in various pastime activities, like sailing and shipbuilding. His mother arranged his marriage to EudoxiaLopukjina in 1689. The wedding was a failure, and ten years later, Peter forced her to become a nun and thus freed himself from the marriage.

The same year, Peter planned to take power from his half-sister Sophia. When she learned about his plan, Sophia conspired with the leaders of Streltsy. Peter was warned about her actions and escaped to the monastery of Troitse-SergiyevaLavra, where he slowly began to gather adherents. Sophia was eventually overthrown, but Peter and Ivan continued to act as co-stars, and his mother exercised power. When his mother died in 1694, he became independent sovereign, and after Ivan died in 1696, Peter became the sole ruler.

Peter the Great was heavily influenced by his advisors from Western Europe and began to implement reforms to modernize Russia. He reorganized the army and dreamed of making the country a maritime power. He also implemented social modernization and introduced the French and western dressing manner in his court.

Peter sought to gain more maritime outlets since his only one at the time was the White Sea at Arkhangelsk. He attempted to acquire the Black Sea from the Ottoman Empire, but his attempts failed. He began building a massive navy in 1695 and launched 30 ships against the Ottomans in 1698. After capturing Azov in July, he founded the first Russian Navy base Taganrog.

Knowing that he will not be able to face the Ottoman Empire alone, Peter the Great embarked on an 18-month trip with a large Russian delegation to Europe. The so-called Grand Embassy tried to find allies but failed. Austria wanted to maintain peace, France was an ally of Ottoman Empire, but Spain was concerned about who would succeed the childless King Charles II.

While in the Netherlands, Peter learned a lot about the European life and studied shipbuilding in Zaandam. He was given the opportunity to practice at the largest shipyard in the world belonging to the Dutch East India Company. In England, he met with King William III and saw the Royal Navy Fleet Review at Deptford.

In 1698, Peter the Great had to return to Russia because of the Streltsy rebellion. The rebellion was stopped before his arrival, but Peter acted upon the mutineers, executing over 1,200 rebels. The Streltsy were disbanded after this. In 1699, Peter changed the celebration of New Year from September 1 to January 1, thus proclaiming the Julian Calendar in 1700.

Peter the Great made temporary peace with the Ottoman Empire and could keep the captured Azov. He was seeking to acquire the control of the Baltic Sea, which was ruled by Swedish Empire. He declared war on Sweden, which was also opposed by Denmark-Norway, Saxony and Polish-Lithuanian Commonwealth. Russia was not ready to fight the Swedes and lost the Battle of Narva in 1700. After the battle, King Charles XII of Sweden concentrated his forces against Polish-Lithuanian Commonwealth, which allowed Peter to reorganize the Russian army.

Peter the Great founded the city of Saint Petersburg in Ingermanland, which used to be a province of Swedish Empire that he had captured in 1703. In 1708, Swedish king invaded Russia and defeated Peter’s army at Golovchin. In the Battle of Lesnaya, Sweden suffered their first loss, stopping the proposed march on Moscow. Sweden refused to retreat to Poland and invaded Ukraine. The Swedes were deprived of supplies during the winter, and in summer 1709 were defeated in the Battle of Poltava.

In 1710, Peter attacked the Ottoman Empire, initiating the Russo-Turkish War. It ended in a complete failure, and Peter had to sign the peace treaty and return the Black Sea ports he seized in 1697. He founded the Senate of ten members as the highest state institution to supervise all the state administrative affairs. The Senate became the most critical institution of Imperial Russia.

Peter the Great's armies continued to fight Sweden, taking the province of Livonia. By 1714, Russians had occupied most of Finland. By 1717 the Russian Navy was so powerful that they could penetrate Sweden. In 1721, the Treaty of Nystad ended the Great Northern War, and Russia acquired Ingria, Estonia, and Livonia, as well as part of Karelia and surrendered most of Finland.

After the end of the war, Peter the Great continued to reform Russia. He was officially proclaimed Emperor of All Russia. Augustus II of Poland, Frederick William I of Prussia and Frederick I of Sweden recognized his title, but not by any other European monarchs. Peter found out that Livonia was so orderly since the Swedish empire had spent as much on administrating the 300 times smaller land, as he did on the entire Russian bureaucracy. In 1718, Peter established nine new agencies of government- navy, foreign affairs, war, expense, income, justice, and inspection, later adding several others.

In 1722, Peter created the Table of Ranks, which marked a new system of precedence, previously determined by birth. The new system meant that merit and service to the Emperor would determine priority. The Table of Ranks continued to work until 1917. In 1714, Peter issued a decree for a compulsory education, which called all 10 to 15-year-old children of the nobility, government clerks, and officials to be educated.

In 1722, Peter the Great launched the Russo-Persian War of 1722-1723, to increase the Russian influence in the Caucasus and the Caspian Sea. Initially, the attempt was successful, but ten years later were ceded back to Persia.

Peter’s only son from his marriage to Eudoxia was suspected to be involved in a plot to overthrow the Emperor. He confessed and was sentenced to be executed, but died in prison. In 1724, Peter crowned his second wife Catherine as the Empress, since he had no male heirs. In 1723, he developed problems with urinary tract and bladder. He underwent surgery to release blocked urine. He went on a tour in November at Lakhta, along with the Finnish Gulf, where he saw a group of soldiers drowning. He went to help in rescue in the icy water, which exacerbated his bladder problems.

In 1725, Peter the Great was struck by uremia and lapsed into unconsciousness. He died on February 8, 1725. The autopsy showed his bladder was gangrenous. Peter was 52 years old at the time.