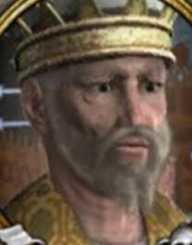 Born Gérard de Bourgogne in Château de Chevron, Kingdom of Arles approximately between 990 and 995 A.D., Nicholas II was elected as Pope on January 24, 1059. He served the post until his death.

Before his election to the papacy, he became the Bishop of Florence in 1046. The support of Duke Godfrey III significantly influenced his election as a Bishop. Cardinals Hildebrand and Peter Damien later elected Nicholas as Pope with the consent of the German imperial court.

Nicholas II grew up in an environment of monastic life with an inclination towards reforms. He had that influence in his mind. Hence, on his election as the Bishop of Florence, he enforced the measures of canonical life among the priests of his diocese. The implementation of the strict canonical life was the first step towards his reformist approach. He brought more effective legislation after becoming the Pope.

Nicholas II's election as Pope was a bit of a complicated event. In 1058, the incumbent Pope Stephen X passed away after a brief illness. According to his desire, his successor could only be chosen after the return of his representative Cardinal Hildebrand (later Pope Gregory VII) from Germany.

However, the influential Tusculani family managed to elect John Mincius, then Bishop of Velletri, as the next Pope Benedict X. The due election process of the Pope was flawed as only two cardinals were present to vote for Pope Benedict X. Cardinal Peter Damien, responsible for consecrating the new Pope was not present during the election as he was on his way to Florence. Many other important Cardinals were also not available for the process.

They unanimously chose Gérard (Nicholas) as the next Pope. The German King Henry IV and the Duke Godfrey of Lorraine extended their unconditional support to Nicholas II for his elevation to the papacy.

After occupying the post of Pope, Nicholas II advanced towards Rome. He was accompanied by Duke Godfrey and the German Chancellor for Italy, Wibert of Ravenna (later Antipope Clement III). Nicholas II convened an ecclesiastical court at Sutri on his way towards Rome. In the council, he pronounced Benedict X deposed. Upon the declaration, the supporters of Nicholas II took control of the city of Rome. Benedict X escaped to Gerard of Galleria. The coronation ceremony of Nicholas II as Pope was held on January 24, 1059.

Upon his coronation as Pope, Nicholas II tried to consolidate his position and with the assistance of the Normans proceeded to wage war against Benedict X and his supporters. They confronted each other at the battle of Campagna in early 1059.

The result was not so satisfactory. He again pressed the accelerator and went on to conquer Tusculum, Numentanum and Praeneste later in the same year. By autumn, he invaded Galleria and forced Benedict X to surrender. The latter also renounced his papacy after the surrender.

The Roman aristocracy controlled the papal election before the dispute between Nicholas II and Benedict X occurred. The Holy Roman Empire sometimes meddled with the process as and when they had the kind of strength and influence. Upon being elected as Pope, Nicholas II felt an urgent need to reform the papal election procedure.

He held a synod in the Easter of 1059 at the Lateran in Rome. 113 Bishops attended the conference. They considered several religious reforms, including the papal election procedure. The synod concluded with the resolution that henceforth, all the papal elections will be done by the Cardinals assembled at Rome only. It was decided that the Church will remain independent in its functioning without any outside interference.

Nicholas II died on July 27, 1061, in Florence, Italy. His papal term remained eventful and left a lasting and indelible impression on the medieval Church and the papacy.