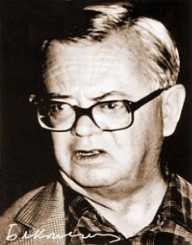 Blaze Koneski was a well-known poet who encouraged, uplifted and stirred people’s mind with his massive collections of poetries. Not only did he make people feel an innate emotion but he also made sure that his presence was felt. He rose to fame not because he was a chosen one, but because he had a profound ability to inspire others. Such was a nobleman who gave his readers the inner strength to overcome life’s problems.

Blaze Koneski loved grammar since his childhood days, and this is what led him to write his dictionary in Macedonian. Aside from his major work, Blaze also rose to stardom as a fervent translator of Russian, German, and Serbian.

Blaze Koneski was widely known for his energetic and inspirational personality. When he combined the two character traits, he used to get involved in more than one project. It is here that he took advantage of his time, hence coming up with out of world themes. Right from his teenage life, Blaze knew how to play with words, and that’s how he started his career as a poet.

Blaze wasn’t afraid of any competition since he knew himself as a conqueror and not a loser. In every situation, Koneski loved to keep things in order. His determination and honesty allowed him to employ competency and high quality writing skill. There is no doubt that he left us with a real definition of culture and education.

On December 19, 1921, Blaze Koneski was first seen in the world in Nebregovo village in the Central Republic of Macedonia. At six years of age, Blaze enrolled at a local primary school where he was later taken to Prilep to end his primary education. He joined General Secondary School, but it was then shut down before completing his secondary education. After a year he entered another school in Serbia and later graduated in 1939.

Right from his teenage life, Blaze Koneski loved everything to do with art especially literature. In the process, he landed a small job at a local school magazine as an editor. He was then advised to join the University of Belgrade where he majored in Medicine. After one semester he opted to change his career to literature in 1940. It was in the same year that he was transferred to the Philosophy department.

Blaze Koneski chose to combine the Russian Language and Russian Literature. In the mid of 1941 during the WWII Blaze was forced to join Sofia University in Bulgaria. But he dropped out in the middle without graduating.

Blaze Koneski's career commenced when he landed a job in Macedonia National Theatre as a reader. He then joined the Faculty of Philosophy at Methodius and Saint Cyril University. He remained in the position until his retirement. In 1947 Blaze co-founded the Writers Association of Macedonia and in 1953 he founded designated Institute for the Macedonian Language. The following year he launched an Association or Union for Macedonian Language and Literature.

Blaze Koneski later became a University Official in the Department of Philology in Skopje. From 1948 to 1960 Blaze was appointed as the Chancellor of the Saints Cyril. He also took part as a member of the Academy of Science and Arts in Croatia, Serbia, Bosnia, and Poland. In 1967 he joined the Macedonia Academy of Arts and Science. The same year he was selected as the president in the same Faculty till 1975.

From 1950 to 1991 Blaze Koneski wrote academic books such as the Dictionary of Standard Macedonian, Grammer of Standard Macedonia, Macedonian Dictionary, Speeches and Essays among others. In the process, he published poetic books including Poems, Land and Love, The Embroideress, Hand-Shaking, The Fountains, Meeting in Heaven, A Diary after Many Years among others. He translated works such as Othello written by Shakespeare, Lyrical Intermezzo authored by H. Heine and Vladimir Mayakovski poems.

Blaze Koneski is majorly known for modifying the Macedonian language. He will be remembered for authoring works such as Grammar of Standards Macedonian, Dictionary and History of Macedonian. For his notable works, he garnered awards such as AVNOJ, Herder and Writer’s Union Award.

Before the end of 1993 Blaze breathed his last at 61 years of age in Skopje, Macedonia. For his outstanding career, he received a nation-state committal. In his honor, the Methodius University named the Department of Linguistics after him.