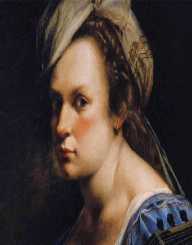 Artemisia Gentileschi was an Italian Baroque painter who despite the less recognition of women painters at the time made became an accomplished painter. Born on July 8, 1593, she is regarded as one of the best painters of the Caravaggio generation. Artemisia Gentileschi is best known for her work, Judith Slaying Holofernes, which "depicts the decapitation of Holofernes, a scene of horrific struggle and blood-letting."

Artemisia Gentileschi became the first women member of the Accademia di Arte del Disegno in Florida, at a period where women were not readily accepted in the artistic community of patrons. Her works encompassed pictures of strong and suffering women from the Bible and myths, warriors, suicides, and victims. Artemisia Gentileschi is currently regarded as one of the most expressive and progressive painters of her generation.

At age seventeen, Artemisia Gentileschi made her first painting work, Susanna e I Vecchioni (Susanna and the Elders). Her father hired a private tutor Agostino Tassi, who he was working with to decorate the vaults of Casino Delle Muse in Palazzo Pallavicini-Rospigliosi in Rome to tutor Artemisia. During this period, Tassi and another person, Cosimo Quorli rapedArtemisia Gentileschi.

While in Florence, Artemisia Gentileschi gained a commission for work at Casa Buonarroti. Artemisia successfully became a court painter with patronage from the House of Medici and Charles I of England. Artemisia Gentileschi became the first woman to be admitted into the Accademia Della Arti delDisegno (Academy of the Arts of Drawing). Artemisia Gentileschi also made friends with prominent artists like Cristofani Allori and gained the favors and protection of Cosimo II de’ Medici, Grand Duke of Tuscany and Grand Duchess, Christina of Larraine. Some of her works in Florence include La Conversionedella Maddalena (The Conversion of the Magdalene), Self-Portrait as a Lute Player (currently at the Wadsworth Atheneum Museum of Art) and Giuditta con la suaancella (Judith and her Maidservant), now in the Palazzo Pitti.

While in Rome her intense painting style in was limited. Much is not known about her activities during this time but works considered to be done in Rome includes Susanna and the Elders (1622), the Ritratto di gonfaloniere (Portrait of Gonfaloniere), now in Bologna andGiuditta con la suaancella, (Judith and her Maidservant) now housed at the Detroit Institute of Arts. Others areVenere Dormiente (The Sleeping Venus), at Virginia Museum of Fine Arts, Richmond, and her Ester ed Assuero (Esther and Ahasuerus) at the Metropolitan Museum of Art in Manhattan.

Naples And The English Period

Artemisia Gentileschi left Rome for Naples in 1630, where Artemisia Gentileschi would live for the rest of her career except some brief trips to London. While there, Artemisia Gentileschi built an artistic collaboration with artists Massimo Stanzione due to the similarities in their work. Artemisia Gentileschi worked on paintings in a cathedral dedicated to San Gennaro nell'anfiteatro di Pozzuoli (Saint Januarius in the amphitheater of Pozzuoli) in Pozzuoli and painted Nascita di San Giovanni Battista (Birth of Saint John the Baptist) in the Museo del Prado in Madrid and Corisca e ilsatiro (Corsica and the satyr). During the close of her career, her works became more feminine, and her style also changed due to her self-consciousness as a woman painter.

Artemisia Gentileschi was married to the Florence artist, Pierantonio Stiatessi a month after her rape. The couple had a daughter, Prudentia in 1618. Artemisia Gentileschi was first taught to have died between 1652 or 1653, but it emerged that as at 1654, she was still accepting new commissions. It was therefore believed that she died in during an outbreak that killed several people in Naples. It killed a whole generation of Neapolitan artists.