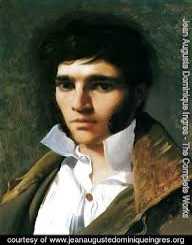 Jean-Auguste-Dominique Ingres was a meticulous and revolutionary portraitist. He had profound painting skills, influenced by his native traditions that culminated in his legacy as a reputable master in his Neoclassical and conservative portraits. His work oeuvre is a precursor to modern art and had a strong bearing on Pablo Picasso and other artists.

Born August 29, 1780, in Montauban France, Ingres was raised by a humble family. Notably, Ingres received his preliminary artistic knowledge from Jean-Marie-Joseph Ingres, his father. His father had several skills in music, sculpture, decorative stone mansion and a painter of miniatures.

Ingres formal education had commenced at the Brothers of Christian Doctrine. However, this was cut short in 1791 during the France political turmoil that abolished the religious orders.

Therefore, owing to the revolution, his father Joseph Ingres took him to study ‘sculpture et Architecture’ at the ‘Academie Royale de Peinture’ in Toulouse. In 1791, he moved to Paris where he joined the studio of Jacques-Lou David, his chief mentor. David was the most renowned artist in France. Two years after he met David, he was accepted in Ecole des Beaux-Arts.

Jean-Auguste-Dominique Ingres culminated his education when he was awarded the  Prix de Rome coveted award.  This was a scholarship awarded by the French state which gave consent for students to study art in Rome at  Academie de France.

In 1802, Jean-Auguste-Dominique Ingres produced 'The Ambassadors of Agamemnon in the tent of Achilles' which became his Salon debut. This production made him win the ‘Prix de Rome.’ Most of his Neoclassical portraits characterized anticipation of the 20th-century modernism. Ingres started to garner reverence from his meticulous and technical mastery with time.

Later, he took up residence in Rome in 1806 and was competent in the study of Italian and mastery in Flemish Renaissance. His style of art was perceived as bizarre (1806-1824). Some thought it was archaic and was frequently faulted by his critics during presentions at Paris Salon.

These critics greatly affected his painting commissions. To support his family, he supplemented his income of painting with his draughtsman skills. Like a classical painter and draughtsman, he always drew portraits before he painted them.

Not deterred by this, he produced ’Bonaparte as First Consul' in 1804. Motivated by his work, he got the public attention two years later at the 'Salon' where he made a remarkable display of several portraits.

It was this official state exhibition and his display of, 'Sabine Riviere' portrait and that of his daughter, Caroline, a 13-year old teen that revealed  Ingres spatial and anatomical application of his skills and ability to manipulate that testified his artistic maturity in portraits.

However, another of his paintings the 'Napoleon I on His Imperial Throne (1806)' was a source of great controversy. This emanated from undeniable facts that the face feature of the portrait was derived from the Byzantine and medieval prototypes while the meticulous details on it depicted the Flemish masters of the 15th century.  His work was much condemned and his artistic skills labeled 'Gothic.'

Officially, his tenure as a student in Academie de France in Rome ended in 1810. However, he opted to reside in Italy following the fact that he had established his business of portraitist among the Napoleonic officials and several dignitaries.

As a beneficiary of the prestigious historic painting genre, Jean-Auguste-Dominique Ingres received occasional commissions to sustain himself. With time in 1811, he was welcomed to redecorate 'Quirinal Palace' which would later become Napoleon's appointed residence. He contributed 'The Dream of Ossian (1813)’ and 'Romulus, Conqueror of Acron (1812)’ monumental canvases.

Fall Of The Napoleonic Empire

Unfortunately, Jean-Auguste-Dominique Ingres' relative prosperity was short-lived after the Napoleonic empire fell. This triggered the French evacuation of Rome. Ingres opted to remain in Italy. This decision was characterized by desperation for work. He was forced to design small-scale portraits of tourists and the English to earn a living.

Although this first sale portrait drawings were meant to reveal personality and appeal the customers and would have been perceived as uncanny by other portraitists, surprisingly, they are among Ingres most admired works despite him scorning them as mere potboilers.

In 1819, Ingres emerged as the master of 'troubadour' genre through ' Paolo and Francesca' painting. This was a typical category reminiscent of those earlier found in the 14th century in the Italian panel paintings.

It depicted a tragic demise of two unfortunate love birds from Dante's Inferno. Due to its reference to the 14th century, Ingres received attacks as he was perceived to have intentions of taking the artwork to its infancy.

'La Grande Odalisque (1814)'elicited outrange in the 1819 Salon due to its radically attenuated features and anatomical distortions revealed in the female nude. Despite the controversy surrounding his female nude portraits, Ingres turned the tide of his critics to his favor.

He strategically relocated to Florence from Rome in 1820. He adopted a conventional style from his hero Raphael. He gave two portraits signifying unity between church and state, namely: 'Christ Giving the Keys to Saint Peter(1820)' and 'The Vow of Louis XIII (1824)’. This move earned him critical accolades and was also elected to Academie des Beaux-Arts in 1824 Salon. Remarkably, in one exhibition, Ingres transformed from one vilified by artists to one most celebrated.

Jean-Auguste-Dominique Ingres opened a studio in France after the successful display of 'The Vow of Louis XIII' in 1825. This studio became one of the largest studios in Paris. In 1827, he exhibited the most famous painting to date ' The Apotheosis of Homer.' It revealed the increasing embattled neoclassical works were subjected to and showed Ingres disposition of cultural conservatism.

In 1832, he released the ' Portrait of Monsieur Bertin’, depicting a generation of the empowered middle class.  His works revealed him as a revolutionary master at the peak of his powers. This picture echoed an enchanting realism which earned him critical accolades during the 1833 Salon.

Since 1829, Ingres had served as a professor at Ecole des Beaux-Arts, and in December 1833 he was elected president of the institution to serve in the following year. During this time, most artists were accused of attempting to promote their artistic policies and in an attempt to influence the entire French painting faculty. This negative energy is best illustrated when Ingres in 1834 exhibited  'Martyrdom of Saint-Symphorien.'

This was an absolute masterpiece, as evidenced by the rumor that hovered in the air. However, this religious portrait was vehemently attacked by his critics. This attacks deeply wounded his will power due to a lack of universal approbation. At the height of his disappointment, he announced that he would never again exhibit at the Salon.

Jean-Auguste-Dominique Ingres had a desire to be the director of the 'Academie de France' situated in Rome. Therefore, he negotiated and got the position and in December 1834 left for Italy. His new job was daunting. It took him six years to only three major mesmerizing canvases: ' Virgin with the Host (1841)', ‘Antiochus and Stratonice (1840)' and Odalisque with a slave (1840)'. ‘Antiochus and Stratonice (1840)’ painting turned the tide to his favor. In 1841, he triumphantly made his return to Paris. He was welcomed by the king to dine, and he was publicly endorsed before an audience of more than 400 dignitaries and politicians

In 1840,  he was the reigning artist in France and much recognized by the Orleanist elite during this time he showcased his works in semipublic exclusive exhibitions where he received prestigious commissions. In the mid-1840s he was remarkably the most sought-after portraitist in Paris.

His winning edge was his ability to capture the grace and splendor and sheer ostentation of the beautiful feminine elite. For instance,  he painted the renowned beauty ‘Mme Ines Moitessier' twice in 1851 and 1856.

Notably, the last works Ingres painted were nudes. For instance, in 1856, he produced 'The Source' a canvas most celebrated, depicting an adolescent girl. This canvas was lacking the anatomical distortions evident in his more controversial female nudes and thus quenched the popular taste with its revealing bit of erotica.

Remarkably, the main prize of his time was the Prix De Rome in 1802. After a boycott of two decades at the Salon, Jean-Auguste-Dominique Ingres was coaxed into the 1855  official exhibition during the Universal Exposition held in Paris. In this exhibition, he displayed 69 works which revealed conservative portraits and a collection of a grand tradition. Progressive critics disliked his style.

On the other hand, the government hailed him for his tenacity and bestowed upon him the title of 'grand officer of the Legion of Honor.' He was the first artist to receive this lofty title. Encouragingly, he was also appointed as the first professional portraitist to the Senate.

He will be remembered for his meticulous works in painting and as an icon of cultural conservation. By 1840, Ingres had built his status as the most renowned artist in France.

Ingres died on January 14, 1867, at the age of 86years. He willed that his more than 4000 drawings and personal collections be housed in his studio in Montauban his home city. Most of his authentic collections are now found at Ingres Museum at Montauban.

To date, there is still scholarly fascination when students explore his oeuvre and his reputation as the most compelling and greatest master of 1the 9th century still echoes.