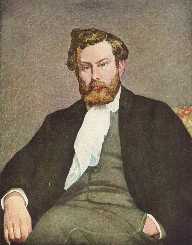 Some of his famous paintings include his work on the Avenue of Chestnut Trees near La Celle-Saint-Cloud, 1865, Still Life with Heron, 1867, The Lesson, 1874 and Bridge Hampton Court in 1874. Unlike Pissarro and Renoir, who fell out of love with Impressionist, Alfred Sisley maintained the style and almost all his works were of that theme. His paintings were characterized by colors like dusty blue, shades of green, pink, cream and purple. When it comes to landscape Impressionist, Sisley remains number one as he

Alfred Sisley was born in Paris to William Sisley, a businessman, and Felicia Sell a music connoisseur. Even though he was initially set to study business in London, Alfred Sisley abandoned the dream four years into his education. He returned to France in 1861 and a year after, Alfred Sisley enrolled at the Paris Ecole des Beaux-Arts with the tutelage of Swiss artist, Marc-Charles-Gabriel Gleyre.

Whiles, there Alfred Sisley met other students like Frederic Bazille, Pierre-Auguste Renoir, and Claude Monet. The four usually teamed up to do outdoor landscape paintings instead of painting in the studio. This approach by them was to make their paintings look real with the capture of the effects of the sunlight. His Impressionist style and subject were inspired by artist like Pissarro and Edward Manet.

As a result, they had brighter and colorful paintings as compared to those done in the studio. However, the consequences were that their works were usually rejected for exhibition at the Salon. This was because the outdoor style did not meet the standards accepted by the jury board. After several tries and turndowns, Sisley finally got his work accepted by the Salon for exhibition in 1868.

However, his ultimate ambitions, which was to raise money from the exhibition was not successful. All this while he was receiving some stipends from his dad for his upkeep. In the 1970s, Sisley’s usual income from his dad stopped coming because of the Franco-Prussian War. His dad business failed, and he was now solely supposed to rely on sales of his paintings. His paintings were also doing badly in sales which means poverty was just at his doorstep.

He sometimes traveled to London where Alfred Sisley did and sold some painting works. In 1874, he participated in the first independent Impressionist exhibition. He returned to France and moved again to Britain this time with his wife. Whiles there, he did some oil paintings of the sea and cliffs.

He later moved to Osborne Hotel, Gower Peninsula where he also painted landscapes around Langland Bay and Rotherlade Bay and later moved back to France where he died. Most of Sisley’s works are missing especially those he did whiles in school. Most of his paintings were focused on landscapes, and he is said to have done works on landscapes than any other Impressionist artist.

Alfred Sisley married Eugenie Lesouezec in 1897 in Cardiff after staying together since1834. They had two children Pierre and Jeanne. The couple stayed together till 1898 when he died at age 59. His wife had died later that that. While in France, he applied for citizenship but it was declined.