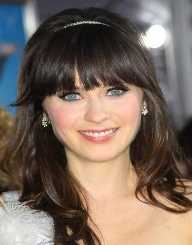 Zooey Deschanel is a multi-talented American actress, singer, and songwriter born on January 17, 1980. Coming from a family with acting background, Deschanel did not find it difficult getting into what can be said as a family business.  Holding on to some roles since her debut in 1999 with the film Mumford, she finally had a breakthrough with the sitcom New Girl in 2011. Her performance gained her nominations for the Emmy Award and Golden Globe Award. Deschanel has before then acted in an autobiographical film, Almost Famous, The Good Girl in 2002, Elf, 2003, The Hitchhiker's Guide to the Galaxy in 2005 Failure to Launch in 2004 and Yes Man in 2008 and several others. Her role in 500 Days To Summer was also outstanding, and she got lots of praise for that.

Having a passion for music, Deschanel made a music debut in 2006 when she partnered with M. Ward to release the album Volume One. She got close to winning a Grammy when her song So Long got a nomination for Grammy Award for Best Song Written for Visual Media. Zooey Deschanel has not only made an impact in the movie industry as an actress but also as a singer. She has composed and sang many soundtracks used in movies.

Zooey Deschanel is the youngest child of actor and movie director Caleb Deschanel and actress Mary Jo Deschanel. She is also the younger sister of actress Emily Deschanel of Bones fame. Her childhood life was more of travelling to new locations because of her dad’s profession as a director a situation she never liked. She had a primary education at Crossroads in Santa Monica where she met co-actors Jake Gyllenhaal and Kate Hudson.

Growing up Deschanel had an interest in music and was never seen without singing her favourite songs. The passion grew through to high school which made her pursue musical theatre at French Woods Festival of the Performing Arts. She later enrolled at Northwestern University but had to drop out after nine months to pursue acting which was her passion.

Before making an official acting debut, Zooey Deschanel made a guest appearance in the series Veronica’s Closet. The appearance ushered her to the big screen with a role in Mumford in 1999. Deschanel a year after picked a part in Almost Famous in which she played the role, Anita Miller. The film, however, failed to make a mark at the Box Office even though it was praised. She also acted in films like Manic, Big Trouble, The Good Girl and Kissing Cousin. Her talent, hard work, and astuteness in the acting field made her one of the most sought for actress in Hollywood according to The New York Times in 2002.

Deschanel popularity kept growing, and in 2003, she finally landed a leading role debut in All the Real Girls. She played Noel who fell in love with a purposeless guy. Her role in the film gained her a nomination for Best Actress at the Independent Spirit Award. She also starred in Elf, a movie which was a Box Office hit that year. In 2005 she starred in The Hitchhiker's Guide to the Galaxy and Winter Summer. Her piano composition Bittersuit was used as one of the soundtracks in Winter Summer. Deschanel acting skills kept growing by the day, and new role kept coming some of which she rejected. That same year she featured in iPhone 4s commercial and also modelled for Clement Ribeiro and Chanel.

In 2006, Zooey Deschanel played roles in four episodes of Weeds, Failure to Launch and was scheduled to play starred in The Gospel According to Janis but the film was cancelled. The cancellation got her upset because according to her, she has invested more in practising to ensure she played her role well. She continued to play roles in several other movies and had a big bang in 2009 when she starred in (500) Day of Summer. The movie became a hit and got the nomination at the Golden Globe Award for Best Picture. It is arguably the most successful movie she has ever done. She was guest starred in the comic movie Bones alongside her elder sister in 2009. In 2011 she starred in Your Highness and New Girl in 2011. Her role in New Girl gained her a nomination for the Emmy Award and Golden Globe Award.

Zooey Deschanel is not just a good actress but also can sing well. She started her music career when she formed If Al the Stars Were Pretty Babies with actress Samantha Shelton. They embarked on a tour in Los Angeles. She then did some vocal works for Coconut Records songs Slowly and Ask Her to Dance in 2007. In 2008, she released her debut album Volume One with singer M. Ward on Merge Records. She was contracted by Cotton Incorporated in 2009 to record The Fabric of My Life for their advertisement. In 2010 the album Volume Two was also released, and she toured the USA and Europe to promote it.

Zooey Deschane went on to release a 12 track Christmas album titled A Very She & Him Christmas in 2011. That same year, she made a cover of It’s So Easy by Buddy Holly for his tribute album. She has also worked with singers like Snow Patrol, Joseph Gordon-Levitt, and Brain Wilson. She had 6 million views within four days on her youtube channel HelloGiggles when a version of What Are You Doing New Year Eve? What she did with Joseph Gordon-Levitt was posted on the channel. Other albums like Volume 3, Classic followed with her latest album being Christmas Party.

Zooey Deschanel's contribution to the movie industry is enormous. She has done soundtracks for movies like The New Guy, Elf, Winter Passing of which his Piano composition Bittersuite was used, Once Upon a Mattress and Raving. Others include Yes Man and Your Highness.

Zooey Deschanel is cautious when it comes to selecting her diet because she is allergic to wheat gluten, egg, and dairy. Her food allergies, made her give up on her vegan practice because eating and staying healthy just on vegan food became difficult for her. She also has a disorder called Attention Deficit Hyperactivity Disorder.

Zooey Deschanel first got married to musician Ben Gibbard well known as the lead vocalist for Death Cab for Cutie in 2009, but the couple broke up in 2011 for personal reasons. Currently, she is married to producer Jacob Pachenik. The two started dating in 2014 and finally tied the knot in 2015 at a private ceremony. They have since then been blessed with a daughter Elsie Otter. She is the founder of the website HelloGiggles.com and also the Youtube channel HellloGiggles.

Zooey Deschanel has been nominated for several awards but has managed to win two of them. In 2003, she won the Best Actress Award at the Mar del Plata International Festival with the film All the Real Girls. She also won Critics Choice Television Award in 2012 for Best Actress in a Comedy Series with the film New Girl.