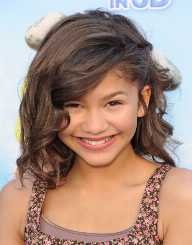 American actress, singer, and dancer Zendaya Coleman was born on the 1 September 1996 in Oakland, California. Her parents are Kazembe Ajamu Coleman and Claire Stoermer. She has five half-siblings on the paternal side, and her ancestry is African-American, Scottish and German.

Zendaya Coleman was a pupil at the Oakland School for the Arts.

As a young girl, Zendaya Coleman performed at the California Shakespeare Theatre in Orinda where her mother was the house manager. She trained at the theatre, doing the student conservatory programme. She also danced for three years with Future Shock Oakland. She started working as a professional model and dancer in 2009. One of her first jobs was as a dancer in a commercial starring Selena Gomez.

Her career breakthrough came when she starred in the Disney Channel sitcom Shake It Up as the character Rocky Blue between 2010 and 2013. At sixteen, in 2013, Zendaya Coleman appeared on Dancing With The Star. She has also starred in Zapped with Spencer Boldman (2014) and KC Undercover (2015). In 2017 she was cast as Michelle in Spider-Man: Homecoming.

Zendaya Coleman released her first single Swag It Out in 2001. This was followed by Watch Me with Bella Thorne, and in August 2012, she signed with Hollywood Records. The single Replay was released followed by her first album, Zendaya was released in 2013.