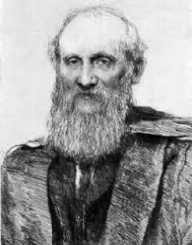 William Thomson was a British mathematician, scientist, and engineer of Scottish origin.

William Thomson was born in a highly educated family in Belfast, Ireland on June 26, 1824. He was the fourth child in the family of seven children born to James Thomson. William lost his mother at the age of six. His mathematician father taught Thomson mathematics at home. He mastered the new branch of mathematics that was practiced in Europe but was alien to the British. He also studied other European languages like French and German. He joined formal education at the age of 10. Thomson enrolled at the University of Glasgow’s elementary school section in 1834.

He became more inclined to sciences than arts in high school. He studied books of higher scientific scope than his grade. Thomson started contributing to scientific journals at the age of 16. In his articles, he argued in favor of the scientific theories of the French scientist Jean Baptiste Fourier. Fourier was at the time a controversial philosopher who was much hated in Britain. His teachers noticed his talent and pressured him to explore a career in physics. Thomson won numerous scientific fairs and journal essays during his time in high school.

In 1841, William Thomson entered Cambridge University at the age of 17. He graduated four years later in 1845. Thomson left for Paris to work under French scientist Henri Victor Regnault. He studied under the guidance of Regnault for one year. He returned to Glasgow Scotland in 1846 after being elected as the dean of physics at the University of Glasgow. He became the youngest dean of physics at the age of 22. He served at the department for over five decades until 1899.

In his mind, William Thomson conceived the idea that all forms of energy were interdependent on one another. He strived to scientifically prove his theory through the consolidation of all approaches to a central scientific point. He established the correlation between the hydro magnetism and the electric current formation in electrical wires. He studied the theory of electromagnetism and Joule’s theory of motion and heat to formulate his basis for research. Thomson came up with the study of thermodynamics.

He had open discussions with other researchers on the scientific theories available, especially the Joule’s theory on heat and motion. In 1851, Thomson mathematically proved that Joule was right on his notion on temperature and movement. In his scientific paper titled On the Dynamical Theory of Heat, Thomson discussed the Joule’s theory and added his findings in the field of thermodynamics. His journey to consolidate all theories to one nerve center had begun.

With his vast knowledge in mathematics, Thomson was able to corroborate the theories of many great researching physicists like Fourier, Joule, and Michael Faraday. He created the mathematical theory of the behavior of heat conduction and flow in bodies and conductors. In his vast researches, he worked with scientists from across Europe. Notable partners were Sir George Stokes, Scottish Peter Tait, and the German physicist Hermann von Helmholtz.

In 1854, William Thomson became a consultant on the feasibility study on the layering of a transmission cable across the Atlantic Ocean bed. Initially, Thomson refuted the possibility of the venture materializing. He argued that any energy being transmitted through the cable would delay in reaching its destination, thus defeating its purpose. He engaged in a scientific debate with the layering engineers of the contracted company for months. At last, he agreed to help in the project as a consultant.

With interest in other mathematical branches, Thomson created and patented many scientific devices during his active life. In 1858, he legally patented the telegraph. He also patented the mirror galvanometer, the marine compass, and the siphon recorder. His siphon recorder was well received in the maritime transmission industry. The Atlantic Telegraph company, the firm responsible for layering the trans-Atlantic cable hired him as a consultant after terminating its contract with Whitehouse. He later got commissioned by two British companies to help in the construction of viable submarine cables for maritime vessels.

For his efforts in the world of mathematics and physics, William Thomson was bestowed the British Knighthood by Queen Victoria in 1866. He became Baron Kelvin of Largs, an honorary hereditary title of nobility in Scotland. Thomson received many other royal and academic trophies and medals for his findings and contributions to scientific theories.

Late in his life, William Thomson denied the validity of the theory of evolution as propagated by the British scientist Charles Darwin. In 1862, he wrote a publication suggesting that a sharp rise of global temperatures aided the changes. He indicated that the sun must have been several times hotter than it is to effect such evolutionary changes. He incurred the wrath of the British geological society based in London.

William Thomson died on December 17, 1907, at his home in Scotland. His body was buried in Westminster Abbey in London. He left no children after having been married twice in his life.