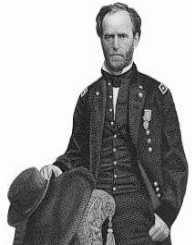 William Tecumseh Sherman was born on February 8th, 1820. He was a renowned American soldier, author, and a businessman. He rose to the ranks of being during the American Civil War in the Union Army. He earned high acclaim for his military strategy. He was also strongly criticized for the harsh policies he implemented while destroying Atlanta. These policies were identified as "scorched earth." During his wartime career, he is mostly remembered for his phrase “War is Hell.”

William Tecumseh Sherman was born on February 8th, in 1820. His birthplace was in Lancaster, Ohio. He was the son of Charles Robert Sherman and Mary Hoyt Sherman. His father was a famed lawyer at the Ohio Supreme Court. His father, unfortunately, died when he was nine years old. He left behind no inheritance. Sherman’s mother was left to raise 11 children. This was part of the main reason why Sherman went to be raised by one of their neighbors in Lancaster.

When he was only 16 years old, Sherman enrolled with the United States Military Academy situated in West Point. Regardless of his outstanding performance, Sherman did not like the system that was being used at the military school.

Immediately after his graduation from the military school in 1840, William Tecumseh Sherman joined the army. Initially, he went ahead and became a second lieutenant. He later saw the occurrence of Second Seminole War that opposed the Seminole tribe. Nonetheless, Sherman was still young, and therefore he was not commissioned to the warfront. Soon, he was posted to serve in Georgia and later in South Carolina. A decade later, Sherman earned his promotion to the ranks of being a Captain. Sadly, during this period there was no combat assignment he could attend to. Therefore, this discouraged him, and he resigned. He took up a job as a manager of Lucas, Turner & Co. bank that was situated in St. Louis.

After some time, the bank was closed, and Sherman relocated to the New York City. Around this period, he attempted to practice law before accepting the post of serving as a First Superintendent. A few years later, in 1861, some southern states were withdrawing from the Union. At this time, he was required to receive arms that had been capitulated to the State Militia. Sherman failed to comply and resigned from his position as a First Superintendent. Following this occurrence, he moved to the North.

William Tecumseh Sherman had a strong desire of earning himself a position in the army, and therefore he moved to the Washington D.C. After that, he met with Abraham Lincoln where he took the opportunity of informing him about the poor state of preparedness that the North had. Regrettably, Lincoln was not responsive regarding the issue. For some months, he went ahead and worked for the St. Louis Railroad company. Later in April, Lincoln administration offered him an opportunity to serve in the military, but he declined.

William Tecumseh Sherman’s first commission came on May 14th, 1861. He was to offer his services as a colonel. He led his troops at the First Battle of Bull Run which occurred after one month in July. He was injured during this battle with bullets on his shoulder and knee. Sherman had lost this battle, but Abraham Lincoln however hailed his heroic efforts. He then promoted him to the ranks of a brigadier general under Robert Anderson.

Some of the major battles that William Tecumseh Sherman is best remembered for include the invasion of Atlanta in late 1864. This was an important battle for him and President Abraham Lincoln as it strongly influenced his succession for his second term as the president. The following year, Sherman captured Columbia. This was part of South Carolina’s capital. Afterward, he was victorious at the Battle of Bentonville where he overpowered Confederate General Joseph E. Johnston and his soldiers.

William Tecumseh Sherman tied the knot to Eleanor Boyle Ewing in 1850. She was the daughter of Thomas Ewing. Their wedding was key political leaders such as President Zachary Taylor.

William Tecumseh Sherman died on February 14th, 1891. He passed away in his sleep at the age of 71.