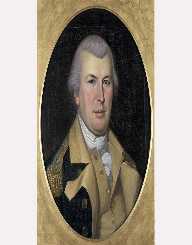 American politician and diplomat William Rufus DeVane King was born on the 7 April 1786 in Sampson County, North Carolina. He was the son of William King and Margaret DeVane and was born into a wealthy family with good political and social connections.

William R. King was a student at the University of North Carolina Chapel Hill where he graduated in 1803. At university, he was a member of the Philanthropic Society. He read law with Judge William Duffy and was admitted to the bar in 1806.

William R. King entered politics in 1808 when he was elected as a member of the North Carolina legislature where he served until 1809. He then worked as a solicitor with the fifth circuit state court in Wilmington. Then in 1810, he stood for Wilmington in the US House of Representatives and won the seat. He served until November 1816 when he joined William Pinkney, the US Ambassador to Russia, as his legation secretary. Pinkey and King returned to the US in February 1818, and William R. King moved from North Carolina to Alabama (which joined the US as the 22 state in 1919.] King purchased 750 acres of land in Alabama and named his estate King’s Bend. Around this time King was instrumental in establishing the town of Selma.

William R. King was elected as a Democratic Republican to the US Senate in 1819 and re-elected as a Democratic Republican and as a Jacksonian between 1822-1841, serving until the 15 April 1844. King then served as President pro tempore of the Senate from the twenty-fourth Congress through to the twenty-seventh. During this time he was chairman of the Committee of Public Lands during the 22 Congress, on the Committee on Commerce (22, 25 and 26 Congresses) Minister to France 1844-1846. William R. King was then elected as a Democrat to the US Senate and served from 1 July 1848 until the 20 December 1852 when he resigned due to ill health. He was suffering from tuberculosis. He again served as President pro tempore of the Senate during the 31 and 32 congresses and was Chairman of the Committee on Foreign Relations in the 31 Congress as well as on the Committee on Pensions.

In 1852 the Alabama Democrats put King’s name forward for Vice President, and after the party had nominated General Franklin Pierce as their presidential candidate, William R. King was chosen as his running mate. Pierce and King won the election. King by this stage was gravely ill and traveled to Cuba to recuperate. Congress passed a bill allowing King to take the oath of office in Cuba and on the 24 March 1853 he was sworn in as Vice-President in Havana Cuba. William R. King returned to the US but subsequently died of his illness after six weeks in office.