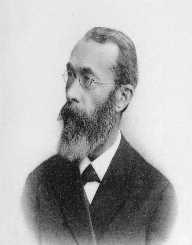 Wilhelm Wundt was the founder of modern-day psychology; he was a doctor who separated the discipline into a separate branch of science from philosophy.

Wilhelm Maximilian Wundt was born on 16 August 1832, at Neckarau, in Baden, Germany.

Wilhelm Wundt was the youngest child of four born to parents Maximilian Wundt and Marie Frederike. Wilhelm was raised like an only child, as a brother and sister died, and his older brother left home to study.

The family moved to Heidelsheim, a small town in Baden-Württemberg, where Maximilian was a new pastor there.

Wilhelm Wundt attended the local school, and the vicar of the pastorate also educated him.

When the vicar moved, Wilhelm followed with his parent’s permission, studying under him until he was thirteen.

Thirteen- year- old Wilhelm Wundt attended Gymnasium at Bruchsal for a year, before transferring to the school at Heidelberg.

Six years later in 1851, he was sent to University at Tubingen, where he focused on physiology after the death of his father. Wilhelm published his first paper on the chemistry of urine in 1853

Wilhelm Wundt started his career as in the University of Heidelberg as Dozens (lecturer) in Physiology in 1857.

Wilhelm Wundt was also an assistant to physicist and physiologist Hermann von Helmholtz and started to give lectures while writing his first book.

Wilhelm Wundt published Contributions to the Theory of Sense Perception in 1862, at the same time he taught the first scientific psychology course.

He had encouraged students to use experimental methods to draw out conclusions, instead of the traditional rational analysis.

The lectures that he used were published in 1863; textbook titled Lectures on the Mind of Humans and Animals. Wilhelm was promoted to assistant professor of physiology in 1864. While researching, Wilhelm turned his sight to neuropsychology.

When his mentor Helmholtz moved to Berlin, Wilhelm was bypassed to replace him in 1871.

It was the same year that he began writing Principles of Physiological Psychology, publishing it three years later in 1874, he sought to promote investigation of human experiences using a conscious examination of conscious experience, which he named introspection.

His ideas were the basis of the experimental psychology.

Wilhelm Wundt moved to the University of Zürich in 1874, where he was the professor of inductive philosophy for a year.

Twelve months later, he moved to the role as Professor of philosophy, a first- class chair, at the University of Leipzig. There, he set up his first research and teaching laboratory.

Wilhelm Wundt s work received recognition starting 1879, that the university and the world formally recognize his work and the term psychology. In 1881, Wilhelm founded Philosophical Studies, psychology field’s first journal, where he published works such as Outline of Psychology and Ethnic Psychology, as well as research results. By 1883, the eleven-room laboratory was known as the Psychological Institute.

In his laboratory, Wilhelm Wundt designed experiments into four categories: sensation and perception, attention and feeling, reaction times, and association. The four categories were then expanded as he found more answers.

Wilhelm Wundt retired in 1917 but continued writing and contributing to his field of study.

Wilhelm Wundt had honorary doctorates from the Universities of Leipzig, Göttingen and other Academies. He was also given Pour le Mérite for Science and Arts.

Wilhelm Wundt wrote almost six hundred works, starting from 1853. It is estimated that he wrote seven works per year on average, spanning topics on animal and human physiology, to a system of philosophy.

Wilhelm’s research and approach gave rise to many psychoanalysts such as Emil Kraepelin, Sigmund Freud

Wilhelm Wundt first met Sophie Mau in 1867; she was the eldest daughter of the Kiel theology professor, Heinrich August Mau. The pair tied the knot on 14 August 1872 in Kiel and had three children: Eleanor, Louise, and Max Wundt.

Wilhelm Wundt died, at the age of eighty- eight, on 31 of August 31, 1920, in Grossbothen, Germany.  He was buried in Südfriedhof, Leipzig, Germany.