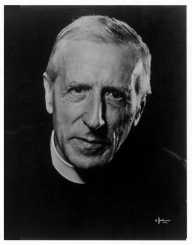 Pierre Teilhard de Chardin was a great French Philosopher and a Jesuit Priest. He was the mastermind behind Peking Man and also Piltdown Man discovery. He is best remembered for his writings on controversial topics.  Among his works Book of Genesis, for instance, he gave a diverted version of traditional creative interpretations. This caused great disappointment among Catholic Church officials, and Roman Holy Office ensured such books were not published.

He trained in paleontology and geology. He was a great influence to many especially other priests and spiritual leaders. Among them were Pope Benedict XVI, Henri de Lubac, and Thomas Berry.

Pierre Teilhard de Chardin was born on May 1st, 1881. His place of birth was Orcines in France. He was the son of Emmanuel Teilhard and Berthe de Dompiere. He was the 4th child of a family of 11 children. His father was a plant and stone collector as well as an amateur naturalist. He was a man who loved to preserve nature. Emmanuel Teilhard was born in 1844 and died in 1932.

Pierre Teilhard de Chardin joined the Jesuit college of Mongré in 1893. He was 12 years old then.  This was a college in Villefranche-sur-Saône. Later in 1899, he joined the Jesuit novitiate located in Aix-en-Provence. Here, he enrolled in his spiritual career by studying theology and philosophy.

He attained his licentiate in literature in 1992 from Caen. He then joined Hastings, in Sussex and for further theology studies. This was from 1908 to 1912.  He also joined the Sorbonne for degree courses in natural science: botany, geology, and zoology.

Pierre Teilhard de Chardin started his career in Cairo as a physics and chemistry and chemistry teacher. This was between 1905 and 1908. On 24th August 1911 at the age of 30, he was dedicated as a priest. A year later he served in Paris at Musée National d'Histoire Naturelle. He devoted his two years working at the paleontology laboratory.

In 1912 Teilhard did research at the Piltdown site.  This was the site where Piltdown Man was discovered. He was among the pioneers to investigate the site along with Charles Dawson and Arthur Smith Woodward. He worked with Moroccan Rifles as a stretcher-bearer during World War I in 1914. In 1916 he wrote La Vie Cosmique meaning cosmic life which was marked the beginning of his essay writing. Later in 1918, he wrote another essay Puissance spirituelle de la Matière meaning the Spiritual Power of Matter.

He joined the Catholic Institute of Paris in 1920 as a geology teacher. He was later promoted to an assistant professor upon attaining his doctorate in science. Teilhard did his geology research in India from 1926 and spent the next two decades of his career doing voyages to many parts of the world.  He participated in a geological survey while in China. This was at Cenozoic Research Laboratory founded in 1928.

Pierre Teilhard de Chardin assumed the role of an advisor.  By 1935 he had an overview of the geological map of China in his fingertips. In 1937 he wrote Le Phénomène spiritual meaning The Phenomenon of the Spirit. He wrote the essay while voyaging on the Empress of Japan boat heading to the United States. Villanova University awarded him Mendel Medal on his arrival at the US. This award was an honor of his exemplary works in human paleontology.

Pierre Teilhard de Chardin died on 10th, April 1955 in New York City. He had suffered a heart attack. He died at the age of 73 and was buried in New York.