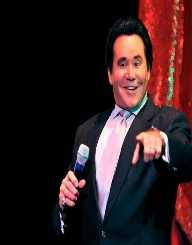 Wayne Newton was born on April 3rd, in 1942. Right from his tender years, it was evident that he was naturally talented to be a professional singer. He alongside his brother performed together when they were teenagers. His solo career earned him remarkable success during the 1960s. Some of the hits released during this time were “Red Roses for a Blue Lady” and "Danke Schoen." After enjoying this success, things opened up for him professionally as he went along to perform which also earned him huge fame more so in Las Vegas, Nevada.

Wayne Newton was born on April 3rd, 1942. His place of birth was in Norfolk, Virginia. His father Patrick Newton worked as an auto mechanic. His mother was called Evelyn Marie. During his tender years, Newton spent most of the time in Roanoke, Virginia. This is where he initially began learning how to play musical instruments such as the piano and the steel guitar. He was only six years old at this time and that he had proved he could take his talent to a professional level.

After some time, his family migrated to Newark, Ohio. Around this period, Wayne took his music career seriously as he performed alongside his brother Jerry in social nightclubs around their place of residence. Unfortunately, young Newton was strongly affected by asthma. His health condition worsened, and his parents were again forced to relocate to Phoenix. They moved in 1952 after which Newton later enrolled with North High School.

With time, Newton took his music career to another level as he began making appearances on some local television shows. He also managed to host his show at one time in his career history. While still studying in high school, he managed to land on a gig where they were to perform at Fremont Hotel & Casino. At first, the deal was to perform for about two weeks. However, their exceptional music talent gave them a deal that took them about a year performing at the same place. Newton and his brother Jerry also successfully made appearances on the hit shows such as The Jackie Gleason Show. Additionally, they took a short role of acting as Jack Benny’s opening act.

Aside from the fact that Wayne Newton got help from numerous celebrities such as Lucille Ball, Danny Thomas, Jack Benny and George Burns, Bobby Darin gave him the assistance he needed to kick-start his professional career. Sooner or later, he released "Danke Schoen" which made it to the top 20 among the charts in 1963. Two years later, he came out with another hit single dubbed "Red Roses for a Blue Lady." This was followed by another successful hit song in 1972 called "Daddy Don't You Walk So Fast."

After some time, Newton slightly dropped in the music charts, but this did not affect his music career. Instead, he enjoyed his new career as an entertainer. He made some performances in Las Vegas which brought him high acclaim. Around this time, Newton earned himself a name for being the highest paid entertainer in Las Vegas. He also indulged himself in USO tours that were tailored to entertain U.S. Military troops.

During the early 1980s, Wayne Newton faced a couple of legal troubles in his life. NBC News had purported that he was associated with certain criminal activities. Rumor was that he was also a silent owner for the Aladdin hotel from funds that he obtained from a particular mob he was linked with. Newton sued the media house for libel. He argued that the rumors about him were untrue and that they simply tarnished his public image. In 1986, Newton won the case against the media house and earned himself a $19 million settlement. This was however reduced later on to roughly above $5 million.

Wayne Newton has been married twice in his lifetime. His first marriage was to Elaine Okamura in 1968. They welcomed their first born child in 1976 before later divorcing each other in 1985. His second marriage occurred in 1994. He wedded Kathleen McCrone and together they had one daughter named Lauren Ashley Newton.