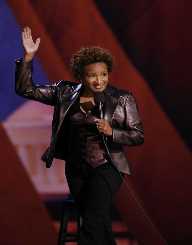 Wanda Sykes is a stand-up comedian, actress, writer and voice artist. She ranks among Entertainment Weekly’s top 25 funniest people in America. She was first recognized as a writer for her work in The Chris Rock Show. She is best known for her appearances in The New Adventures of Old Christine.

Wanda Sykes was born on March 7, 1964, in Portsmouth, Virginia but grew up in Washington D.C. Her mother was a banker and her father - US Army colonel, employed at the Pentagon. Sykes went to Arundel High School in Maryland, but later want to study at Hampton University where she earned bachelor’s degree in marketing. After university, Sykes started to work at the National Security Agency as contracting specialist.

Wanda Sykes worked at the NSA for five years, but she knew that this job did not suit her at all. She started her stand-up career, first at Coors Light Super Talent Showcase in Washington, DC. Her first performance was in 1987. She continued to perform in various locations until 1992 when she left her job at the NSA and moved to New York.

There Sykes met the famous comedian Chris Rock and her big break was opening for him at Caroline’s comedy club. After that, she joined The Chris Rock show as a writer and also as an actor in some screen roles. In 1998 Sykes won an Emmy for her work on the show, along with three other nominations.

After her big break, Wanda Sykes was offered various roles. She featured in the 1998 film Tomorrow Night, in 2000 film Nutty Professor II - The Klumps, 2001’s Down to Earth and Pootie Tang. Her recent roles include movies like My Super Ex-Girlfriend, Clerks II, Monster-In-Law and Evan Almighty. She also voiced the Granny in the Ice age: Continental Drift.

Wanda Sykes has appeared in various TV shows, like The Drew Carey Show, Curb Your Enthusiasm and show she is most known for - The New Adventures of Old Christine. She has also taken the lead role in various projects, but none of them lasted for long. Sykes ran her own late night talk show, called The Wanda Sykes Show. It ran for one season in 2009/10 on Fox. Behind the scenes Sykes is working on the reality competition Last Comic Standing as an executive producer.

From 1991 to 1998 Wanda Sykes was married to David Hall - record producer. The marriage ended, and in November 2008 Sykes publicly came out as gay. A month later she married her girlfriend Alex Niedbalski, who she met in 2006. Alex gave birth to twins - Olivia Lou and Lucas Claude. Sykes only came out to her parents when she was 40 years old. They had trouble accepting her sexual orientation and even declined to attend her wedding.

In 2011, Sykes announced that she had been diagnosed with Ductal carcinoma in situ - early-stage breast cancer. Although it was early stage and non-invasive cancer, Sykes decided to undergo the complete mastectomy to prevent recurrence of cancer.

Wanda Sykes has been nominated for seven Primetime Emmys. She won in 1999 for "Outstanding Writing for a Variety, Music or Comedy Special" for her work in The Chris Rock Show. She also won the American Comedy awards for “Funniest Female Stand-up Comic” in 2001 and Comedy Central Commie Award for “Funniest TV Actress” in 2003.