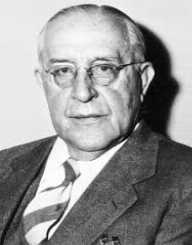 Victor Francis Hess was born on June 24th, in 1883. He was an Austrian-American renowned physicist. He was honored with a Nobel Prize for discovering cosmic rays.

Victor Francis Hess was born on June 24th, 1883. His place of birth was in Waldstein Castle, an area near Peggau in Austria. His father, Vinzens Hess worked as a royal forester under the administration of Louis Kraft Ernest, who was a Prince.

In 1893, Victor Francis Hess enrolled with Graz Gymnasium where he studied until 1901. Immediately after completing his studies here, he joined the University of Graz for four years and graduated in 1905. He pursued his higher education at the same institution and later obtained his Ph.D. in 1910. He had been studying physics all along.

After obtaining his Ph.D. in 1910, Victor Francis Hess went to work at Institute for Radium Research where he worked under Stefan Meyer for about a decade. In 1921, Hess migrated to the United States where he got employed at United States Radium Corporation situated in New Jersey. After some time, he also worked as a Consulting Physicist at the US Bureau of Mines.

He made his return to his former university in 1923 after which he took the post of an Ordinary Professor of Experimental Physics two years later. In 1931, he went on to work with the University of Innsbruck where he was also recognized as a professor. During the same year, he was appointed as Director Institute of Radiology for the same university.

In a bid to escape persecution from the Nazis, Victor Francis Hess moved with his family to the United States in 1938. Moments later, he was made the Professor of Physics at the Fordham University. Hess later obtained his official US citizenship in 1944.

Victor Francis Hess greatest discovery came in between 1911 to 1913 where he undertook research that would later earn him a Nobel Prize. To proof his point, he had to undertake risks in measuring radiation at different altitudes during this period. From the discovery that he made, radiation only decreased from the ground up to 1km level. Beyond this, radiation increased. At about the height of 5km radiation was found to be twice that of sea level. This discovery was contrary to earlier perceptions that people had. Initially, people thought that radiation decreased with increasing distance from earth’s surface.

Victor Francis Hess got married two times. His first marriage was to Marie Bertha Warner Breisky in 1920. Seeing that she was a Jew, he had to flee with her to the US when the Nazis threatened to persecute Jews.

Unfortunately, his wife passed away as a result of cancer in 1955. He wedded Elizabeth M. Hoenke, his wife’s nurse in the same year. Hess did not have any children from the two relationships he was involved in.