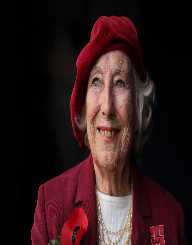 British singer and entertainer Vera Lynn was born in East Ham, Newham, London on the 20 March 1917. Her parents were Annie Martin and Samuel Welch. At a young age, she showed an interest in singing and performing and adopted the stage name of Vera Lynn.

Her first recording was Up to the Wooden Hill to Bedfordshire (1936), and she performed with various dance bands. Then in 1939, she recorded the song that earned her the title of The Forces Sweetheart during World War II (1939-1945), We’ll Meet Again. Vera Lynn also recorded The White Cliffs of Dover, another song that struck a chord with the general public during the war years.

During World War II Vera Lynn had a radio show which sent out messages of support to the troops and also performed songs the soldiers sent in requests for. As her fame increased, she took part in the war effort by visiting hospitals. She also became a member of the Entertainment National Service Association and gave concerts for the forces fighting in Burma, Egypt, and India.

Vera Lynn’s success continued throughout the 1950s, and in 1952 she became the first UK performers to have a number one hit, Auf Wiederseh’n Sweetheart (1952). During that decade she also had hits such as My Son, My Son and The Homing Waltz and Forget-Me-Not. She had her variety show on BBC1 during the 1960s and1970s. In the early 1970s, Vera Lynn appeared on the BBC’s Fifty Years of Music and in 1976 was the host of the BBC’s A Jubilee of Music. In 1977, she released the album Vera Lynn in Nashville. She also appeared on The Royal Variety Performance in 1960, 1975, 1986 and 1990.

Vera Lynn is the only artist to have appeared on the British album and singles from 1952 into the 21st century.  She has appeared on This Is Your Life twice, once in 1957 and again in 1979.

Vera Lynn recently celebrated her 100th birthday. Her husband of forty years, Harry Lewis died in 1999, and she has a daughter Virginia.

Apart from her work with the National Entertainment Service during World War II, Vera Lynn continued this work by advocating for war veterans. She also served on various charities including her work as president of the Dame Vera Lynn Trust For Children with Cerebral Palsy.