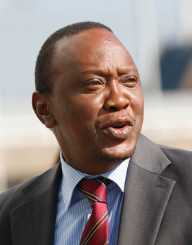 The fourth and most current president of Kenya, Uhuru Kenyatta, was born on October 26, 1961 in Nairobi, the capital of Kenya. The name "Uhuru" is a word meaning "freedom" and is likely the result of the sociological influences of his country at the time. Being a son to parents Jomo and Ngina Kenyatta, it is said that Uhuru experienced a generally happy and fulfilling childhood. His family is also said to have been in a place of wealth, and good political and social standing. This is the result, no doubt, of Uhuru's father. Jomo Kenyatta is considered one of, if not the, founding father of Kenya. Additionally, he served as the country's first President. This alone set Uhuru into a sort of beaten path of politics.

For his earliest education, Uhuru attended St Mary's School in his birthplace. However, after graduation from high school, he temporarily moved to the United States in order to attend Amherst College of Massachusetts. This is where he would further his interests in the political world by studying government and economics alike.

After graduating from college and moving back to Kenya, Uhuru an agricultural product company titled Wilham Kenya Limited. The company was a great success even off of the bat. However, Uhuru did not stay in this business long. As a result of his family's political history and his own attributes and studies relating to the field, he was drawn back to the path of politics once more. In 1997, after efforts to join, he got selected as chairman of the parliament known as Kenya African National Union. This was an important step and meant a lot to Uhuru because not only was it a part of his birthplace and home but it is a step that his own father had taken previously before. Furthermore, he went for another specific position that his father had held once more in the form of a parliamentary seat. However, he lost in competition to Moses Mwihia.

Despite the loss, Uhuru had the support of the then current president, Daniel Arap Moi, whom he had been minister for at the time since 1999. Moi had supported Uhuru even after his defeat in 1997. And as a result of his backing and more, Uhuru was as the first National Vice Chair Man and obtain the seat in parliament that he had sought after before.

President Moi put a lot of support in the backbone of Uhuru at this time. In a way, it was said that he was setting him up for something great. Some even say it was a ploy to have a puppet in power.

It came to a point when there was even a push from the president for Uhuru to be nominated in the Presidential Election. Uhuru was still considered under experienced and unfit at the time by a lot of the parties members. However, Moi further solidified the push for nomination and further on election. This whole situation refers even more so back to the notion of a puppet in office. If this were the case, then even in retirement, the then current president could have major influence. Unfortunately for Uhuru, when it came time for the election, he lost in somewhat of a landslide to opponent Mwai Kibaki. In a complete one eighty, Uhuru surprisingly switched sides following the results. Five years later he even gave full support for his new ally Kibaki in a reelection. In 2005, he would go on to defeat Nicholas Biowitt for selection of the chairman for KANU.

Following all of this, Uhuru was selected as the Minister of Local Government in 2008. This selection was an immediate success, and he gained the title of Deputy Prime Minister and Minister of trade later that year. And, between the years of 2009 and 2012, he was Minister of Finance. He gave up that position as Minister of Finance after the alleged crimes against humanity that were thrown against him in 2012. The charges related to that of violence that followed as a result of the elections known as Kenyan Crisis. For several years the charges the case would be drawn out. However, in 2015, as a result of a general lack of evidence, the case was stopped in its tracks.

In the 2013 Presidential Election, Uhuru would try his chances once again and run for President. His opponent was Raila Odinga. The race was close. However, Uhuru managed to win in the end.

Uhuru Kenyatta has been married to Margaret Gakuo Kenyatta since 1991. The couple has a total of three children; Jomo, Jaba, and Ngina.

Uhuru made a lot of initial promises to the people of Kenya in the beginning of his election. With this, he also faced many challenges coming in such as a huge line between poverty and wealth, a high cost of living, wages, and much more. His promises included education improvement through bar setting, better health care in specific areas such as maternal rights and privileges, and a few others. His results were better than average and gained a lot of favor from the people. Additionally, his ambassador relations with other country's and provinces such as China, United States, Rwanda, and Uganda bared great fruit. The economic growth and stability under Uhuru's presidency has been relatively position with an over five percent increase all the way around.

He did, however, fall short in regards to security in the public's eyes. This is due to a general lack of action taken executively in combination with the remaining consistently high crime levels that Kenya still faces.

His ratings of approval were generally low during the beginning of his Presidency. However, this is attributed to the newness of his venture. Not long into his place, his rates improved considerably. Currently, he is considered one of the best African presidents to this day.