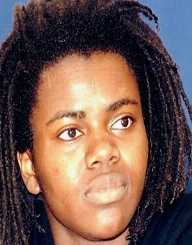 Tracy Chapman is an American Pop singer and songwriter born in March 30th, 1964. She has won the Grammy Award four times in her music career. The musician with a beautiful voice is known for her songs "Baby Can I Hold You” and "Talkin' 'bout a Revolution."

Tracy Chapman was born a singer. She was only eight years old when she began penning down songs and playing the guitar. Even more amazingly, she started playing ukulele at the age of three. Besides singing, she is also politically active. She supports humanitarian activities and is known especially for her support towards Make Poverty History.

Tracy Chapman was born on March 30th, 1964. Her place of birth is in Cleveland, Ohio in the United States. Her mother raised her on her own and greatly supported her music talent. With the little money she made, her mother bought her a ukulele. Tracy Chapman was just three at the time. When she turned eight, she started playing guitar having been inspired by Hee Haw Television show which she liked watching. During this time, she also wrote her songs.

Tracy Chapman schooled in Episcopal high school having been raised a Baptist. Later, she joined Wooster School situated in Connecticut. Subsequently, she enrolled in Tufts University. After her studies, she earned a bachelor’s degree in African studies and anthropology. During this time as a student, Tracy Chapman continued nurturing her music career. She would perform her songs in Boston while recording other songs.

In 1986, Tracy Chapman had a golden opportunity to work with Elektra Records’ manager. She recorded her first album Tracy Chapman rose which was released in 1988. The album was ranked no.1 both in the UK and the US that year.

Among the singles of the album was "Fast Car," which was quite popular. In fact, it was rated position six on the US charts and position 5 in that of UK. In 1989, she was the best female pop vocal performer, best new artist, and best contemporary folk album. Therefore, she proudly earned three Grammy Awards.

In 1989, Tracy Chapman recorded her other album Crossroads. She also co-produced the album which included the single song "Freedom Now." This was a dedication to Nelson Mandela, the former president of South Africa. However, this second album was not as successful compared to her first.

Tracy Chapman’s third album was titled Matters of the Heart released in 1992. This was followed by New Beginning in 1995 with "Give Me One Reason," among its singles. This was one of the famous songs in the album. In 1997, the song also earned Tracy Chapman her 4th Grammy Award.

The other albums Tracy Chapman has released in her music career include: Telling Stories in 2000. In 2008 she released Our Bright Future. Since then she has constantly avoided the spotlight.

In the mid-1990s Tracy Chapman was involved with another woman, Alice Walker. However, she has never revealed anything concerning her sexual orientation. She does not like mixing her private life with her work.