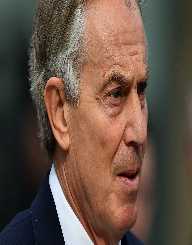 Tony Blair was Prime Minister for the United Kingdom from 1997 for ten years. He is the leader of Labour Party from 1994 until his retirement, and the only one in the party’s 100-year history to win three consecutive elections.

Anthony “Tony” Charles Lynton Blair was born on 6th of May, 1953 in Edinburgh, Scotland. He has an older brother, Sir William Blair, who is a High Court Judge. He has a younger sister Sarah too. His parents are Leo and Hazel Blair, and the parents raised the children in Paisley Terrace in Willowbrae when Leo was working as a junior tax inspector while studying a law degree at the University of Edinburgh.

In the early 1950s, the Blairs moved to Adelaide, South Australia, where Leo became a lecturer of law in the University of Adelaide for three and a half years. The family returned to Glasgow and then moved to Durham, England when Leo became a lecturer at Durham University. When Leo suffered a stroke before a Parliamentary election in 1963, the family suffered financial stress

Tony Blair attended Chorister School in Durham from 1961 to 1966, after moving back to Edinburgh, he boarded at Fettes College. He studied Jurisprudence at  St. John's College at Oxford University, graduating in 1975 with a Second-Class Honours. Tony Blair joined Lincoln's Inn, enrolled as a pupil barrister, to follow his father’s political footsteps. His mother passed away from thyroid cancer that same year.

During school days, Tony Blair was the lead singer in a rock band Ugly Rumors. He played the guitar and performed stand-up comedy, with Mick Jagger and Captain James Kirk as his muses. Ugly Rumors rock band performed songs by Rolling Stone, the Doobie Brothers, and other bands.

Tony Blair joined the Labour Party after graduating from Oxford in 1975, after observing that miners were the inner strength of England’s Labour Party. He involved himself in Labour politics in Hackney South and Shoreditch. He was a candidate for Beaconsfield in 1982, but he did not win the election.

Tony Blair's first win was in 1983, where he won a seat in Parliament for the Sedgefield District. He was helped in his campaign by soap opera actress Pat Phoenix. Despite his win, the party suffered a landslide defeat in the elections.

Tony Blair received his first frontbench appointment as assistant Treasury Spokesman in 1984. The next year, he demanded an inquiry into the Bank of England's decision to rescue the collapsed Johnson Matthey Bank. He was promoted after to shadow minister for Trade and Industry in the City of London in 1987 election.

When Neil Kinnock resigned as leader of the Labour Party in 1992, he was succeeded by John Smith. Tony Blair became the elected leader when John Smith died of a heart attack in 1994. He is still the organization's youngest leader to date. Tony defeated John Prescott and Margaret Beckett in the race for Labour Party’s leadership roles.

Tony Blair became the Prime Minister of the United Kingdom on 2 May 1997, winning by a landslide. His appointment meant he was serving concurrently as First Lord of the Treasury, Minister for the Civil Service and Leader of the Labour Party. He is the youngest person to become Prime Minister since Lord Liverpool in 1812. Tony Blair is also the only Prime Minister with three consecutive general election victories, with victories in 1997, 2001, and 2005.

Tony Blair’s primary focus was his vision to create a nation "where people succeed on the basis of what they give to their country." He instituted the “one person, one vote” system, ending block voting, by which leaders of labour unions cast votes on behalf of their members before he was Prime Minister.

As Prime Minister, Tony introduced the National Minimum Wage and raised it to £5.52. His focus on education led to Academy Revolution, funding schools and students, creating a record high of literacy and numeracy in schools. He also boosted hospital funding to reduce inpatient waiting list and deaths.

Tony Blair retired as Prime Minister and Leader of Labour Party in 2007. He is now serving as Quartet representative to the Middle East to fight against religiously based extremism, and to build relations between Arabs and Israelis. He founded Foundation the Africa Governance Initiative, to help deliver change programmes.

He also established the Tony Blair Faith Foundation, with the aim to combat extremism. The foundation works in over 20 countries with education and tracking extremism across the world. Tony also founded and funded Tony Blair Sports Foundation, dedicated to boosting grassroots sport for young people in the North East of England. Tony also chairs The Climate Group International Leadership Council.

During his internship with Derry Irvine, Tony Blair met fellow intern Cherie Booth. They married in 1980, and have four children: Euan, Nicholas, Kathryn, and Leo. He had become a grandfather in 2016.

Tony Blair is a devout Christian; he was an Anglican until his conversion to Catholicism in 2007. He had criticized Christian leader’s stance on sexuality, and also made decisions that are not aligned with the religion.