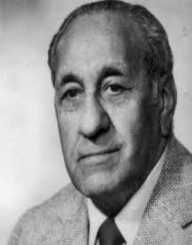 Antonio Joseph Accardo popularly known as Big Tuna and Joe Batters was an American organized crime leader. Born on April 28, 1906, he started committing petty crimes at a very young age as a member of the Circus Café Gang.

Tony Accardo soon joined the Chicago Outfit and gradually rose through the ranks to become a day-to-day boss in 1947. By 1972, he had become the final authority of the Outfit. He had exerted significant influence on the gang during his tenure by expanding its territories and operations.

Antonio Joseph Accardo was born on April 28, 1906, in Near West Side, Chicago to Maria Tilotta and Francesco Accardo. His father was a shoemaker. His parents were emigrants from Castelvetrano, Sicily in Italy. Accardo dropped out of school at age 14 and started engaging in criminal activities.

Having resolved to make crime a profession, he joined the Tony Capezio, and Claude Maddox ran Circus Café Gang. The organization was a feeder to some of Chicago's main crime organizations. Jack “Machine Gun” McGurn, a hitman of Chicago Outfit boss, Al Capone, identified Accardo and recruited him into his team.

As a member of the Chicago outfit, Tony Accardo engaged in several criminal activities, establishing him as a formidable member in the organization. Al Capone supposedly gave him the nickname “Joe Batters” after Accardo used a baseball bat to kill three gangsters for betraying the Outfit. He also earned the nickname “The Big Tuna” from the Chicago newspaper after catching a giant tuna during a fishing expedition.

Tony Accardo claimed taking part in most of the serious crimes the Outfit committed. The murders include the 1929 St Valentine’s Day Massacre when Capone’s gunmen killed seven members of the Bugs Moran’s North Side Gang. The rising mobster also took part in the killing of the Brooklyn gang boss Frankie Yale. He is believed to have also taken part in the murder Northside gang boss, Hymie Weiss.

After the imprisonment of AI Capone for tax evasion, Frank “The Enforcer” Nitti took over as the Outfit boss. The new boss allowed Tony Accardo to form his crew, becoming a capo. He also became the head of enforcement of the Outfit.

He was also into gambling, extortion, and bookmaking among several others. He received a so-called 5% “street tax” from his crew earnings, and in turn, paid tax to his box. Refusing to pay the street tax attracted a death penalty.

Tony Accardo rose through the ranks and became influential in the Outfit. Nitti had previously served 18 years in prison for tax evasion and being afraid of returning to jail due to ongoing investigations of the Outfit for extorting labor unions in Hollywood; he ended his life in 1943.

Accardo became the underboss after Paul “The Waiter” Ricca took over as boss of the Outfit. He became the acting boss when Ricca received a ten-year jail term for his involvement in the Hollywood fraud. He took over the organization three years later.

As the boss of the Outfit, Tony Accardo expanded the deals of the organization to include producing spurious liquor and cigarette tax stamps. They engaged in narcotics smuggling, prostitution, and vending and slot machines.

The Outfit also expanded its territories to parts of Las Vegas taking over the gaming industry in the state. He ensured casinos installed his slot machines and that increased profits from that industry. Accardo made several other changes to ensure the Outfit avoid attracting law enforcers.

He stepped down as the boss of Outfit in 1957 when the IRS began watching him closely. Sam Giancana replaced him. He still had some substantial power in the Outfit until his death.

Tony Accardo married Clarice Pordzany, who he first met in 1934. The couple had four children. Aside from his involvement in crimes, Accardo had holdings in car dealerships, commercial office buildings, legal investment, hotels, restaurants, lumber farms, and retail centers among several others. Accardo died of heart and respiratory conditions on May 22, 1992, at age 86. He was interred in Queen of Heaven Cemetery, in Hillside, Illinois.