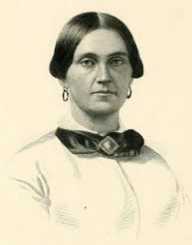 Mary Elizabeth Jenkins Surratt was born in May 1820. She hit the headlines as the first American woman to be executed by the United States federal government. Surratt's crime included conspiring to assassinate U.S President Abraham Lincoln. She owned and operated a boarding house. It is here that it is claimed Surratt together with John Wilkes Booth planned the assassination.

Surratt's son, John H. Surratt, Jr. also had to face a tribunal of the same count of offense but did not get a conviction. Until today, the suit against Surratt remains controversial. She played innocent up till her death.

Mary Surratt was born in May 1820, Waterloo, Maryland. Some sources are not clear on her exact birth month or year. She first went to a Roman Catholic girl's school even though both parents were non-Catholics. Although she left this world in quite a dramatic manner, Surratt initially had a quiet life. She attended a female Catholic seminary where she met John Surratt.

Mary Surratt's family lived in the District of Columbia for a while. They later moved to Maryland where they formed a tavern. At the same time, they began operating a post office and a polling place. After the death of Surratt's husband, she took over and managed his estate. She then moved back to her townhouse in Washington D.C.

Surratt then met John Wilkes Booth, George Atzerot and Lewis Powell. The three often visited the boardinghouse. Following the assassination of Lincoln, Surratt had to comply with an arrest. She faced the military tribunal a month later alongside other conspirators. Five out of the nine judges in her trial ruled that Surratt is eligible for mercy.

The then President Andrew Johnson did not grant Surratt mercy. However, it is not clear whether he received the plea or not. On July 7th, 1865 Surratt died by hanging for the assassination of President Abraham Lincoln.

May Surratt died on July 7th, 1865. After her execution, Surratt was buried in Mount Olivet Cemetery. She has since motivated and featured in the production of some films, theatre, and television.