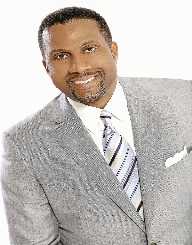 Media personality and author Tavis Smiley was born on the 13 September 1964 in Gulfport, Mississippi. Smiley’s mother Joyce Roberts became a young single mother. When Smiley was a toddler, she married Garnell Smiley, who was in the US Air Force. Later, Smiley’s stepfather transferred to Bunker Hill, Indiana. Tavis Smiley reveals the identity of his biological father in What I Know For Sure: My Story of Growing Up in America.

Tavis Smiley’s high school education took place at Bunker Hill's Maconaquah High School. Tavis Smiley became interested in politics during his high school years; and was on the student council and the debating team. He then enrolled at Indiana University and studied public affairs. He left the university in 1988 before getting his degree; but later, in 2003, completed his course and graduated.

Time magazine announced in 1994 that they had named Tavis Smiley as one of their 50 Most Promising Young Leaders. In the late 1990s, he won the NAACP Image Award for the best news, talk, or information series for three years in a row for his work on Tonight with Tavis Smiley. Time magazine named him one the 100 Most Influential People in the World (2009). Tavis Smiley was awarded a star on the Hollywood Walk of Fame in 2014. He has won the Mickey Leland Humanitarian Award from the National Association of Minorities in Communications because of his long-term interest in African-American issues and his commitment and advocacy. He has won many other awards and honorary doctorates.

Tavis Smiley is single, and his net worth estimated to be US10 million. His focus has always been on the African-American community as a broadcaster, political commentator, and activist.

Tavis Smiley’s mother brought up her family in the Pentecostal Assemblies of the World faith.

Tavis Smiley initially worked for Tom Bradley, the mayor of Los Angeles in 1990. Tom Bradley is distinguished as being the first African-American of LA. Smiley ran for a position on the LA City Council in 1991 but did not win. He did, however, manage a respectable fourth out of fifteen candidates.

Tavis Smiley then turned his attention to working in radio. His first job was as a radio commentator broadcasting sixty-second sound bites known as The Smiley Report on KGFJ radio. He focused on events of the day relating to the African Community. The next step in his career was on The Tom Joyner Morning show (1996-2008).

During 2007, Tavis Smiley acted as a moderator on two of the live presidential candidate debates. One for a Democratic forum at Howard University in Washington DC and a Republican forum in Baltimore at Morgan State University.

In 2014 Tavis Smiley appeared on Season 19 of Dancing With the Stars.

Besides his involvement in radio and television; Smiley has written many books including What I Know for Sure: My Story of Growing Up in America (2008). Fail Up: 20 Lessons on Building Success ( 2013). Death of a King: The Real Story of Dr. Martin Luther King Jr’s Final Year (2016) by Tavis Smiley and David Ritz. The Rich And The Rest of US: A Poverty Manifesto co-written with Cornel West (2012) and The Covenant with Black America - Ten Years Later (2016). He recently co-authored a book about the final days of Michael Jackson entitled Before You Judge Me: The Triumph and Tragedy of Michael Jackson’s Last Days (2016)