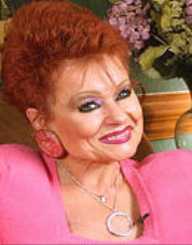 American televangelist Tammy Faye Messner was born Tamara Faye LaValley on the 7 March 1942 in International Falls, Minnesota. Her mother was Rachel Fairchild and her father, Carl LaValley. Both parents were Pentecostal preachers. Her mother left the church after divorcing her husband when Tammy Faye was an infant (1941).

After marrying Jim Bakker in 1961, Tammy Faye and her husband became evangelists. Bakker preached, and Tammy Faye sang gospels songs and played the accordion. In 1966, they joined Pat Robertson’s Christian Broadcasting Network and became famous as the hosts of The 700 Club.

The Bakkers founded the Praise the Lord network in 1974 and the Jim and Tammy Show reached millions of households. They built Heritage USA, a religious theme park and resort in Fort Mill, South Carolina. In 1987, there were accusations of sexual misconduct against Jim Bakker, and in 1989, he was imprisoned for defrauding PTL investors of over $150,000 million.

Jim Bakker was jailed for the fraud and, in 1992,  the couple divorced. Tammy Faye then married Roe Messner (1963), a family friend and the contractor who had built Heritage USA. In 1996, Roe Messner was given three years for bankruptcy fraud.

Tammy Faye Messner continued with her career and produced a number of books and frequently appeared on television. She told Tammy Faye Celebrity Wigs, was the subject of a successful documentary, The Eyes of Tammy Faye (2000) and she also wrote a book, Tammy: Tell It My Way.

Tammy Faye Messner's first husband was Jim Baker (m.1961-div.1992). They had two children: Tammy Sue (b.1970) and Jamie (b.1975). She later married Roe Messner. Tammy Faye was first diagnosed with cancer in early 1996. She had colon cancer, was treated and went into remission. Then in 2004, she was diagnosed with lung cancer. She was featured in a documentary about how she was dealing with her cancer diagnosis and treatment.

Tammy Faye Messner died of cancer on the 20 July 2007 in Loch Lloyd, Missouri. She was 65 years old. Her son Jay Bakker is an author; his first book was Son of a Preacher Man (2001), his story of growing up as Tammy Faye and Jim Bakker’s son during their PTL heyday and the impact it had on his life.