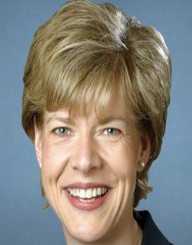 In 1986, Tammy Baldwin was elected to the Dane County Board of Supervisors, and she held the position until 1994. During this same period, from 1989 to 1992, she was also working as a lawyer in private practice.

In 1992, Baldwin ran for a seat in the 78th Assembly District of Wisconsin, and she won. She was openly gay, one of only six that won seats that year. She was re-elected for a second term in 1994, and then a third term in 1996. Her committee assignments during that period were the Criminal Justice Committee, and the Education Committee, of which she was Chair.

In 1998, a vacancy arose in the U.S. House of Representatives when Congressman Scott Klug announced his retirement. Tammy Baldwin ran for the seat and won. She was the first woman from Wisconsin to be elected to the House of Representatives, and she was the first openly gay person as well. Baldwin was re-elected for a second term in 2000 and held her seat right through to 2010 when she won re-election for the seventh time.

Tammy Baldwin was on the Committee on Energy and Commerce, on the two subcommittees, Environment and Economy, and Health.

In 2011, Baldwin announced she would be running for the U.S. Senate, and in 2012 she was elected, the first openly gay candidate to win. As she had been in the House of Representatives for 14 years, Baldwin had the highest seniority over the other senators entering with her. She has been in the U.S. Senate since 2012, and she is running for re-election in 2018.

Tammy Baldwin was in a relationship with Lauren Azar for 15 years. They registered as domestic partners in Wisconsin in 2009, but they separated in 2010.