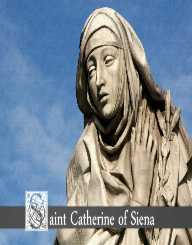 St Catherine of Siena was an Italian laywoman, mystic, activist, and writer.

Caterina di Giacomo di Benincasa was born in the city of Siena, Italy, on March 25, 1347. Her mother was Lapa Piagenti, a homemaker. Her father was Giacomo di Benincasa, a fabric dyer. She was her parents’ 23rd child. Her family gave her the nickname “Euphrosyne,” meaning “joy.” When she was five years old, she had a vision of Jesus Christ with Apostles John, Paul, and Peter.

She soon decided to dedicate her life to God. At the age of sixteen, she found out that her parents wanted to marry her off. She refused to do that, determined to devote herself to religion instead. Her parents eventually gave up and let her do as she pleased.

Catherine soon joined the Third Order of Saint Dominic. As a tertiary, she lived in her family home instead of a convent. In 1368, she envisioned her wedding ceremony with Jesus Christ. Later on, many painters depicted this event, calling it the “mystical marriage of Saint Catherine.” She also claimed that Jesus had told her to stop living a secluded life and help the people instead. She soon started visiting hospitals and homes to aid the ill and the poor. She attracted groups of followers which gathered up around her.

Catherine soon began to get involved with specific political events. In 1374, she traveled to Florence for a meeting with the Dominican authorities. After this, she travelled throughout Italy with her followers. She advised the people to repent, and she advocated for a new crusade. In 1375, she tried to sway the cities of Pisa and Lucca from an alliance with the anti-papal league.

She also began writing letters to many influential political and religious figures. They included Pope Gregory XI, the queen of Naples, the king of France, the Visconti noble family, and others. In 1376, she went to Avignon to negotiate peace with the Papal States as a representative of the Republic of Florence.

In 1377, Catherine returned to Siena to found a woman’s monastery. During this time, she wrote The Dialogue of Divine Providence. This book depicted a conversation between God and a lost soul. In 1378, she tried to negotiate peace between Rome and Florence. She also visited Pope Urban VI, trying to convince the cardinals about his legitimacy.

Catherine spent many years maintaining an extremely rigorous fast. Some clergy members were against it, advising her to eat correctly. She claimed she could not do that because she had an illness. At the beginning of 1380, she completely lost her ability to eat and could no longer walk properly. She soon suffered a stroke which left her almost completely paralyzed. She passed away on April 29, 1380, in Rome. She was 33 years old. Her body was buried at the cemetery of the Santa Maria Sopra Minerva church. Her remains were later moved inside the basilica. Her head was removed from her body and put inside a bronze bust. The bust was then taken to the Basilica of San Domenico in Siena.