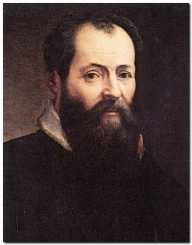 Giorgio Vasari was an internationally acclaimed artist and art historian. He was also an architect. Giorgio Vasari mainly rose to fame after publishing a collection of biographies of Italian Renaissance artists.

A book, which to many artists is the ideological foundation of art-historical writing. With many of his pictures still valued by many artists around the world coupled with his great reputation as an architect, Giorgio Vasari must have been one of Italy most influential artists in the 16th century.

Giorgio Vasari was born in Arezzo city, Tuscany, Italy on 30th June 1511 to Mr. Antonio Vasari, a potter, and his wife, Maddelena Tacci. As a young boy, his cousin Luca Signorelli recommended and set him up to train under the guidance of a skillful stained glass painter, Guglielmo de Marcillat.

Giorgio Vasari trained with him until he was sixteen years of age after which he was sent to Florence, the then Italy’s capital city to gain further the necessary expertise needed to be a professional artist.

In Florence, Giorgio Vasari got acquainted with Rosso Fiorentino, Michelangelo, the Medici family, among other artists and Andrea del Sarto trained them. Here, his humanist education was encouraged and his painting style influenced by that of his friend Michelangelo.

Giorgio Vasari also visited Rome in 1529 to study the finer points of a painting by observing the works of Raphael and other masters to incorporate some of it into his work.

Having completed his studies, Giorgio Vasari was got employed consistently by the Medici family, the most influential patrons of the arts, in various cities including Rome, Florence, Arezzo, Naples, among others.

In 1547, he completed what he considered the toughest assignment of his career at the time, i.e., the frescoes at the hall of Palazzo Della cancelleria, Rome. During this time, he also started writing a book titled, Lives of the Most Eminent Painters, Sculptors, and Architects, which discussed the works, techniques, and lives of some of the greatest artists of the time.

The book that made him famous and the first of its kind was finally published in the year 1550.

In 1555, Giorgio Vasari together with a team of assistants undertook the contract of painting the frescoes at Palazzo Vecchio in Florence and this marked the beginning of his famous art-work. Apart from his painting work, Giorgio Vasari was also was also an architect. In fact, he is more highly regarded as an architect by experts. As an architect, one of his famous works was the Uffizi in Florence which was commissioned by a member of Medici family and was constructed in the year 1560.

Other famous works by Giorgio Vasari include the renovation of some big churches, construction work at the Cavalieri di San Stefano Palace located in Pisa, among others. The most famous and celebrated of all his works is, however, his book that chronicled the lives of Renaissance artists. This book is still regarded a great reference tool for those who wish to study the history of the great artists. Despite being one of his biggest legacies, this book has received criticism from various historians due to blatant bias towards certain artists.

In 1563, Giorgio Vasari co-founded the Florence Academia e Compagnia Delle Arti del Disegno with Michelangelo and other artists. The institution had a total of 36 artists chosen as its member s with the Grand Duke and Michelangelo as the captains. In his native town, he was elected the Municipal Council of Priori. Moreover, his house in Arezzo was turned into a museum in his honor.

In 1549, Giorgio Vasari, at the age of 38, married his wife, Nicolasa Bacci. The couple, however, never had children at all. Although he had no children with his legal wife, Giorgio Vasari did have two children before their marriage. The mother of the children is said to have been his housemaid whom she never married despite having children with together.

During his lifetime, Giorgio Vasari amassed a considerable fortune and enjoyed high repute. He built his fine house in Arezzo in1547 and decorated its vaults and walls with paintings. The house has since been turned into a museum in his honor.