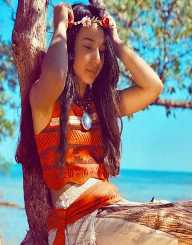 Sophia Montero is a singer and Youtuber from America. With a sweet voice, smart dance moves and oodles of charm, Sophia Montero began singing in 2013, mostly by producing covers of her favorite songs.

Sophia Montero started a YouTube channel called ThisisAngelic, whereby she could record videos of herself singing covers of favorite songs Sp[phia could edit the videos and come up with quality content, and in next to no time, she gained vast popularity with many YouTubers flocking in to check out her stuff.

Sophia Montero gained attention from various audiences, including teens and adults. Sophia performs fantastic covers of the likes of Katy Perry and Shawn Mendes. Apart from the covers, Montero also came up with a personal, sensational and authentic track called `your favorite song.’ By now, her channel has over 570 thousand followers, with a total of over 100 million views. To wrap it all up, Sophia launched her app called This is Angelic, that is available for iOS and Android.

Sophia Montero was born on 22nd June 2004, in Miami, Florida. Sophia's parents are Leonel and Maria, who are believed to be of Venezuelan descent. She has three siblings, consisting of an elder sister and two brothers.Sophia is known to be very fond of one of her brothers and refers to him as `angel.’ More so, Sophia has a lovely young niece.

Contrary to popular belief that success takes time, things were all different to Montero. Sophia Montero gained overnight fame, courtesy of her cover of renowned track `Roar’ by Katy Perry. At nine Montero's cover was top notch, with a quality performance that could rival veteran singers. Apart from her sweet voice, Montero had uber adorable facial expressions and cute movements that drove the YouTube world crazy.

The sky is the limit for young Montero. The `Angelic covers’ have always received nothing but blather praises. The covers consist of songs by famous teen singers, i.e., Miley Cyrus and Justin Bieber, and have enjoyed over a million views. One of Sophia Montero's top covers is `Problem’ by Ariana Grande which had over 30 million views. Other examples of her popular covers are; Miley Cyrus’s wrecking ball, Shower by Becky G and what do you mean by Justin Beiber.

What makes Sophia Montero stand out as a cover artist is her natural good looks, singing, dancing and acting skills. Also, Montero is always inventive and usually come up with new ideas in her cover videos.Sophia's passion for singing is evidently high, yet she is still a young, normal and innocent for her age. Most people are much amazed by what Sophia Montero has achieved in such a short time, and at such a tender age, which contributes immensely to the growth of her fame.

Apart from the singing success, Sophia Montero is a pretty and fun-loving personality. Montero is always loving and passionate towards her fans, and shares details of her daily life to them, through a personal vlog named `Angelic diary.’