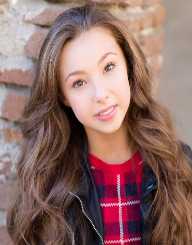 Sophia Lucia was born on 7th September 2002. She has one sibling, an older brother named Vinny.

She was very fortunate, that even at a young age, her parents recognized her talent, and encouraged her to do the dancing which she loved and was so obviously good at. They enrolled Sophia Lucia in the San Diego Dance Centre, California. Her focus was on ballet, jazz, and contemporary dance.

As well as attending school, by the age of 10, Lucia was training in dance for between 35 – 40 hours per week, so her schedule was very full.

Sophia Lucia started dancing as a toddler, at the age of two. At the age of three, she began dancing classes and entered her first dance competition that same year.

Once she had local recognition, Sophia Lucia began to post a video of her dancing to youtube. Once she did this, she began to garner a lot of attention. She also started posting mini videos tonInstagram. Her You Tube channel has over 130,000 followers, and her Instagram over a million. Once the talent scouts saw how much attention she was attracting on social media, Sophia Lucia  began to receive offers for television.

Whilst still young, she made appearances on hugely popular shows like So You Think You Can Dance, X-Factor, and America’s Got Talent. She then went on to make her film debut for a Fox movie called The Shirley Temple Story, in 2010. In 2013 she got her break on Dance Moms. Through her appearances on Dance Moms, Lucia became one of the most recognized young talents on television in the United States.

Sophia Lucia  is very entrepreneurial, and has her own line of dance wear, California Kisses. She runs a competition each year to find an upcoming dancer/actress to model her latest dance wear ranges.

Sophia Lucia's  most recognizable work would be on Dance Moms. Her mother, Jackie, also appears on the show with her.

Sophia Lucia  has won several dance competitions, and also has the following achievements:

Sophia Lucia  has made appearances in over 11 television programs, along with several commercials and modelling assignments. She is well known for always being on time, and having a professional demeanor. Lucia has certainly got herself off on the right foot, and it looks set to continue.

Her parents must be very proud of her with the effort she has put in, the grounded manner she conducts herself in, and the entrepreneurial head upon her shoulders that she has already started conducting successful business with. The future certainly looks very bright for Sophia Lucia as she continues to cement herself in the entertainment industry.