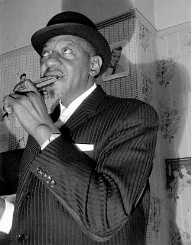 Sonny Boy Williamson, born John Lee Williamson, was one one of the founding members of the Chicago blues scene. He was born the 30 March 1914 in Madison County to Nancy Utley and Ray Williamson. His father died when he was an infant. At a young age, Williamson showed an interest in music and the first instrument he was given was a harmonica.

During the Great Depression, Sonny Boy Williamson toured the South playing with musicians such as Robert Nighthawk and Big Joe Williams. In 1937, Williams relocated to Chicago, Illinois where he formed a harmonic-led group which became famous. He was signed to the Bluebird recording label and had the opportunity to play with many of the legendary blues musicians.

He also began writing and recording his songs including Good Morning Little School Girl and Hoodoo, Hoodoo. Williamson recorded with Bluebird (1937-1945) as well as Victor (1945-1947).

Sonny Boy Williamson was beaten to death with an icepick outside a Chicago nightclub after finishing a gig on the 1 June 1948.

John Lee Sonny Boy Williamson Day is celebrated on the 1 June and has been since 1990. There is a historical marker placed on Tennessee Highway 18, close to Williamson’s birthplace. His song Good Morning Little School Girl is now a blues classic. The Yardbirds recorded the song in the 1960s, and later the Grateful Dead also did a version of it.

From 1937 to 1945, Williamson recorded for the Bluebird label, sharing many sessions with guitarist Big Joe Williams. From 1945 to 1947, he recorded on the Victor label. When he started recording in 1937, he still maintained his southern roots. With his distinctive vocal style and fluent harp, he sounded like a country boy. "He played with all the rhythmic subtlety of the best country blues, slurring and wailing the harp notes, making the harmonica almost a single entity....But gradually the rural sound changed, as if the country boy was wising up to city ways," wrote Giles Oakley, author of The Devil's Music: A History of the blues.

John Lee "Sonny Boy" Williamson helped propel the country blues of his native Southland toward a more exhilarating, urban-blues sound with his blend of originality, country intensity, and the electrification of his music with the piano, bass, and drums. His tempo was so overpowering that he placed a pillow under his feet during recording sessions to silence the sound of his feet keeping time to the beat.

Pete Welding, on Blues Classic's Album 21, described Williamson as "a forceful singer, popular recording artist, and the first truly virtuoso blues harmonica player, whose rich, imaginative solo flights resulted in completely re-shaping the playing approach and the role of his humble instrument in the blues." Many of his songs are considered today as blues classics.

In the wee hours of the morning, on June 1, 1948, the blues world lost one of its most influential harmonica players when John Lee "Sonny Boy" Williamson was beaten to death as he left one of Chicago's nightclubs. In keeping with the lyrics he often sang in life, "Now I want to bury my body, 'way down in Jackson, Tennessee," Williamson's body was conveyed to the city of his birth.

For forty-two years, his body rested in an unmarked grave, sheltered by the deep shadows of the Jackson woods and covered with a verdant blanket of kudzu. On June 1, 1990, city officials, family members, friends, recording executives, and blues enthusiasts gathered to celebrate "John Lee 'Sonny Boy' Williamson Day" and to dedicate a Tennessee historical marker, placed on Tennessee Highway 18 and Caldwell Road, near the site of the musician's birthplace.

RCA Records, whose corporate history includes the Bluebird and Victor labels on which Williamson became famous, presented a rose granite gravestone to mark the resting place of the forgotten blues great. Since 1937, Williamson's first commercial recording, Good Morning, Little School Girl, has been recorded numerous times by artists who include The Grateful Dead and Canned Heat.