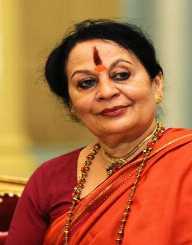 Sonal Mansingh is a renowned Indian choreographer and classical dancer. The Guru Bharatanatyam and Odissi dancing styles are her strongholds. Aside from dancing, Sonal Mansingh practices other professions as well. She is a teacher, social reformer, philosopher among others. Back in her time dancing was not considered as an honorable profession. This did not prevent Mansingh from fighting her way to be the famous dancer she is now.

She later came to use her dance skills in prison reforms, the environment, and issues concerning women. Sonal Mansingh believes that dance should be a medium to air the views of the society. Her determination has not only earned her much fame and respect but also influenced many people, especially from her community. Sonal (2002) a documentary film on her by Prakash Jha won the National Film Award.  It was selected as the Best Non-Feature Film that year.

Sonal Mansingh was born on April 30, 1944. Her birthplace was in Mumbai in British India. She is the second born to Arvind Pakvasa and Poornima Pakvasa. She has two other siblings. Her mother was a well known Indian social worker. She later died on April 25, 2016.  Mangal Das Pakvasa, a freedom fighter was her grandfather. He was a great influence and mentor to her career from a young age. He died on November 6, 1968.

Sonal Mansingh started her dancing lessons at the age of 4. She began with Manipuri dance taught by a teacher in Nagpur. Her elder sister accompanied her during the lessons. Later at the age of 7, she joined Nagpur where she learned Bharatnatyam. She then joined Elphinstone College in Bombay. She graduated with Bachelors degree in German Literature. She was also awarded other degrees in Kovid and Praveen in Sanskrit. This was from Bharatiya Vidya Bhavan.

She traveled to Bangalore when she turned 18.  This was the time her actual dancing lessons began. She was taught Bharatnatyam by Chandrabhaga Devi and Prof. U. S. Krishna Rao. Later in 1965, she was taught Odissi dance by Kelucharan Mohapatra.

1962 marked the beginning of her dance career. Sonal Mansingh did dances from her work and came up with many productions with time. She performed Sanyasi- Upagupta in the 1970s. During this time she also performed another poem entitled Mary Magdalene. Dance has since then taken her to several countries in the world.

Sonal Mansingh is the founder of Centre for Indian Classical Dances-CICD. This is an Indian classical dance center training center in New Delhi. She launched the center in 1977.  Meanwhile, she kept performing her dances especially Bharatnatyam and Odissi style. She produced Ashta-Nayika in 1993. This is a dance-drama which she was her director, producer, and performer. This production was a feature on the phases of the emotion of eight women in love.

She traveled to Australia in 1994 to take part in the International Festival of Perth. She performed Draupadi at the festival. She toured the US in 2001 when World Trade Center was attacked. She did her dances in many of the states in the US.

Sonal Mansingh has earned many awards through her great achievement in her dances and career. She was presented with Sangeet Natak Akademi Award in 1987. Later in 1991, she was awarded the Rajiv Gandhi Excellence Award. She was honored with Padma Bhushan in 1992 and Indira Priyadarshini Award in 1994. In 2003 she was awarded the Padma Vibhusan and Kalidas Samman in 2006

Sonal Mansingh was first married to Lalit Mansingh. He was former Indian Diplomat. They later divorced upon which she was married to a German. They again divorced after a while.